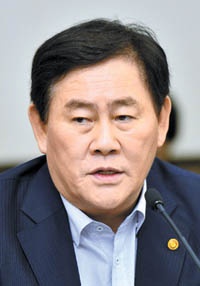 Finance Minister Choi Kyung-hwan indicated that Korea’s economy will have trouble achieving the government’s projected growth of 3.1 percent this year, citing downside risks as a factor.

His comments came during a visit to a farm in Ussuriysk, eastern Russia, run by top shipbuilder Hyundai Heavy Industries.

“Korea is expected to face headwinds to reach the government’s economic growth forecast due to the downside risks on external fronts,” the minister said.

“Although local demand has started to get back on track, the overall slump in global trade, affected by China’s slowing economy, will hurt Korea’s exports, which will consequently contribute less to economic growth.”

As for the upbeat gross domestic product (GDP) reported in the third quarter, Choi attributed the gain to the government’s fiscal stimulus package and other measures designed to prop up consumption.

The central bank said the recovery of domestic demand offset the effect of cooling demand in China and elsewhere.

“It came as a surprise,” he said, “Supplementary budgets and consumption-lifting measures contributed to the results.”

The minister’s remarks are the latest in a series of negative predictions about Korea’s economic growth.

Earlier this month, the Bank of Korea cut its growth outlook earlier to 2.7 percent for 2015, down from 2.8 percent three months earlier.

In September, the Finance Ministry lowered next year’s growth outlook to 3.3 percent, from 3.5 percent.

Much of the pessimism has to do with Korea’s dependence on China, which was exposed during the most recent downturn in the world’s largest economy.

After Chinese stock markets began plummeting in June and China’s central bank devalued the yuan over worries about its own weakening exports, the Korean economy and its financial markets nosedived.

The Kospi dropped more than 13 percent in the two weeks following the devaluations, and August exports plunged 14.7 percent year-on-year.