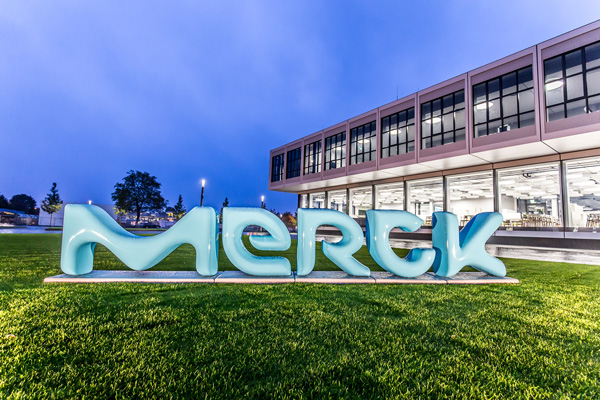 DARMSTADT, Germany - Located along a sprawling lawn in Darmstadt, Merck’s new Innovation Center is the proving ground for the German company’s expansive vision that encompasses high technology and life science. 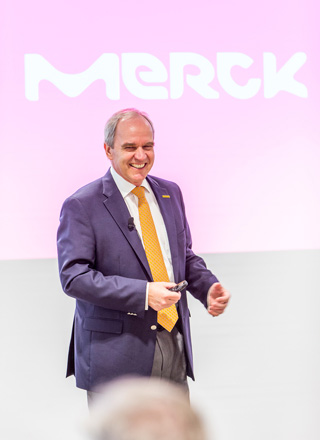 Karl-Ludwig Kley, chairman of the executive board and CEO at Merck, presents a new logo at the Innovation Center on Oct. 14. [MERCK]

Merck has long since expanded beyond its traditional business portfolio centered around pharmaceuticals to include emerging sectors through a series of mergers and acquisitions.

From liquid crystal windows to super-slim OLED screens, Merck’s technology is embedded throughout the establishment, though it’s not always visible.

But the two-story center, clustered alongside Merck’s headquarters, has symbolic significance in addition to being a space to facilitate cooperation between workers and partners. Stefan Oschmann, the incoming chairman of the company, will likely put forward digitalization and innovation as a primary focus, and the Innovation Center is expected to play an integral role until the company’s latest Innovation Center is completed in 2018.

The center under construction will boast a much larger space than the existing one that has a surface area of over 1,400 square meters (15,000 square feet).

From the entrance, a large touchscreen display made of Merck’s liquid crystals greets visitors. The screen shows information about and events taking place at the center.

On the way to the co-creation space, there are luminous decorative panels that display shimmering lights.

The panels are the result of organic light-emitting diodes (OLED), one of Merck’s signature technologies. Merck supplies OLED materials such as small molecules and soluble material systems to leading consumer electronic makers including Samsung Electronics and LG Electronics.

OLEDs deliver more accurate color, but they are also thinner and more flexible, making them an ideal option for decorative displays, as well as televisions.

A more diverse array of gadgets and technology is on display in the co-creation space, where anyone can collaborate on projects.

The accessibility is in line with the main objectives of the building: enhancing openness and transparency.

“The development of the Innovation Center was based on guiding principles such as openness and transparency to make innovation accessible for all Merck employees,” the head said.

“That’s why we have different areas in the Innovation Center - some of them usable by all Merck employees and some of them limited to project teams.”

Since the space is intended for certain events or meet-ups, it is equipped with devices that facilitate communication in a large setting.

ClickShare, for example, is a wireless presentation system that allows any meeting participant to share content by clicking a button inserted into the USB port of their device.

One of the glass walls of a conference room appears to be a normal divider, but given the nature of the center, it shouldn’t surprise anyone that it’s actually much more.

When users press a button, the wall turns opaque to increase privacy while still allowing light to enter. The wall can turn completely white to be used as a board, a transformation made possible by liquid crystals.

The first floor has another room that mainly serves Merck workers. To enhance openness and create an environment that fosters innovation, there are none of the cubicles seen in traditional offices. The desks and chairs of the room all have wheels to increase the flexibility of the interior design and forge a more free and cooperative atmosphere.

The room’s most impressive feature is a telepresence robot called Double Robotics that allows for interactive communication among people located around the world.

The robot has an iPad for videoconferencing attached to a Segway-like bottom, which can be controlled by a faraway worker to let them approximate actually being in the office.

The highlight of the Innovation Center, however, stays hidden on the second floor. There, one of the hallways is filled with liquid-crystal windows - one of Merck’s key products.

The windows’ shading technology controls how much sunlight is let in without obstructing the view.

In addition to its practicality, the technology saves energy and manages the building in a more sustainable way, according to the company.

The windows can also play an aesthetic role, as each unit is made of several layers of liquid crystals, each featuring different colors. Together, they can be transformed into a gigantic lighting display, providing artistic opportunities for glass-fronted buildings.

As much advanced technology as is featured at the site, the company said more is to come at the Innovation Center currently under construction.

The large investments for both the current center and the upcoming Innovation Center shows Merck’s focus towards high-end tech.

The move comes as Merck introduced a new brand logo and image earlier this month, an initiative to reinforce its shift towards advanced technology.

The company called the change a “fundamental revision of the visual appearance as well as the introduction of a new logo to reflect the transformation into a global science and technology company.”

“Merck has fundamentally changed over the past 10 years,” emphasized Karl-Ludwig Kley, chairman of the executive board and CEO.

“We have developed from a classic supplier of pharmaceuticals and chemicals into a global technology company,” he said, “... For this we have deliberately rid ourselves of outdated features and will be focusing on a young and eye-catching image.”

In addition to the new brand image, the company added that it will uniformly operate as Merck outside America by dropping its two divisional brands, Merck Serono and Merck Millipore.