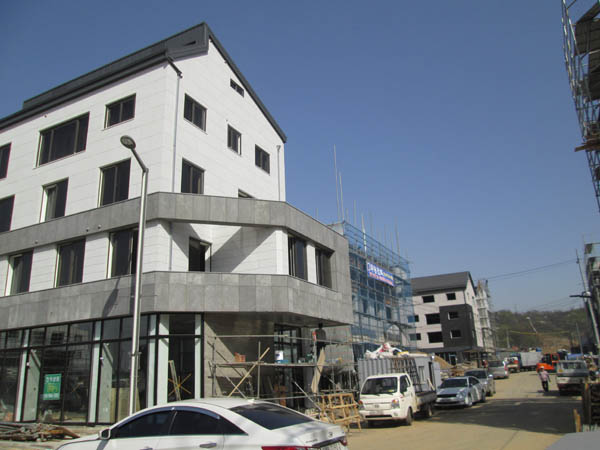 Workers are busy in Jangji-dong, southeastern Seoul, building a four-story building that will hold a number of apartments.

The area near the Bokjeong subway station is emerging as a hot place for redevelopment because it is one of a few places in the country that is authorized for multi-household residential use.

Koreans usually use this kind of plot to build multi-unit apartment buildings. Commonly, the owner of the plot lives in one unit or an entire floor and rents out the other units.

In other parts of Korea, landowners are restricted to building three-story apartment buildings with one household per floor. Multi-household residential use allows four stories, up to six households and even a retail store on the ground floor.

Historically low borrowing costs are boosting the popularity of developments in such districts, so much that there are already worries of a bubble in those areas’ real estate prices.

One such place is Wirye in southeastern Seoul. As it is located just across the Tancheon stream from Gangnam District, the country’s most affluent region, Wirye is a rising superstar in the real estate market since the government announced an easing of greenbelt regulations that allows new development.

Realtors say some plots initially offered for around 15 billion won in August 2014 sold for 2.4 billion won. Some buyers even offered 1 billion won extra to buy those plots, brokers said.

In other areas in Gyeonggi such as Gimpo or Yeongjong, premiums - cash payments offered by buyers on top of the price on the contract - jumped to 100 million won.

Since August 2014, a total of 200 plots in Wirye were sold. That accounts for nearly 30 percent of the current multi-household residential use land in Wirye, data showed.

In Gimpo and Yeongjong, about 40 percent of the multi-household land has changed hands.

“Demand for multi-household land is so high that we can’t make deals due to lack of supply,” said Jeong Min-yeong, a realtor in Gimpo. A core reason for the high demand is that most Koreans want to live there and earn monthly rental payments.

In Wirye, if a building owner rents out a store on the first floor, four residential units on the second and third floors and lives on the fourth floor himself, he can gross about 8 million won monthly in rental payments.

Considering the average cost for constructing a new building after paying a premium to get a plot, the total cost of redeveloping a plot could reach 3 billion won.

Even if an owner receives the maximum rent possible, the annual earning rate could be only about 2 percent, economists say.

“Unlike apartment buildings, rentals in ordinary houses are in less demand, so you can’t earn the profits you may expect, especially if the jeonse [lump-sum rent] crisis ends,” said Lee Nam-su, a real estate specialist.