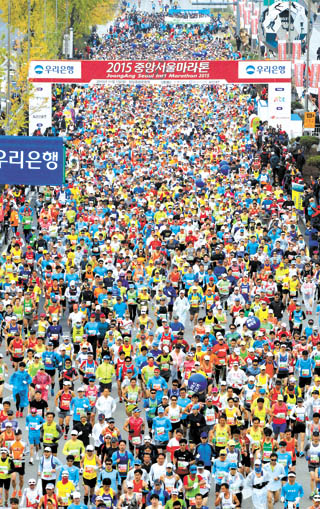 Participants at the 2015 JoongAng Seoul International Marathon begin the race at Jamsil Sports Complex in Seoul on Sunday. More than 14,000 amateur runners competed the race that stretches from Seoul to Seongnam, Gyeonggi. [KIM KYUNG-BIN]

The Ethiopians defended their title against the Kenyans at the 2015 JoongAng Seoul International Marathon on Sunday, with Tebalu Zawude winning the men’s elite race in his event debut.

Hosted by the JoongAng Ilbo, Ilgan Sports and the Korea Association of Athletics Federations, the event was held on the 42.195-kilometer course that spans Jamsil Sports complex in southern Seoul and Seongnam, Gyeonggi. While running alongside some 14,000 amateur runners, Zawude was the first man to cross the finish line at 2 hours 8 minutes 46 seconds, beating Kenyan Gideon Kipkemoi Kipketer by 15 seconds.

Since the race first started in 1999, Kenyans have won the JoongAng Seoul International Marathon nine times, more than any other nation, but now Ethiopians are starting to catch up. Zawude is the third Ethiopian to win the race in this event after Solomon Molla in 2008 and Feyisa Bekele Woldemikael in 2014. He will collect a prize of $50,000.

“I didn’t know I would win,” said Zawude, who was visiting Korea for the first time. “My condition was good.”

This was Zawude’s third full-course marathon race after he first competed the full course at the Frankfurt Marathon last year. Zawude, who turns 28 today, has been running long distance since 2013.

“I learned how to control my pace as a 10,000-meter runner,” he said. “I think my style was executed well and as I run, I became more confident.”

Zawude, whose personal best is 2:07:10, was in the leading group with Kipketer and James Kipsang Kwambai until the 38-kilometer marker, but sped up at 40 kilometers to take the lead.

Kwambai, who has won the event three times, more than any other runner, finished fourth at 2:09:23. The 32-year-old was looking to regain his title for the first time in two years, but didn’t have enough stamina and was even surpassed by Ethiopia’s Abreham Cherkos Feleke, who edged Kwambai by 1 second to claim third place. 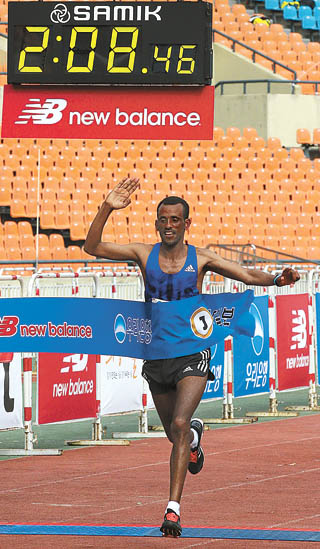 Among Koreans, Son Myeong-jun was the top finisher in 10th place with 2:13:29, his personal best. The 21-year-old Konkuk University student was doing his second full-course marathon race after the Daegu International Marathon in April.

Son will receive 10 million won ($8,783) for his top finish. Son was coming from two gold medal wins at the National Sports Festival last month, winning the 5,000 meters and the half-marathon. “My goal is to compete in the Summer Olympics in Rio de Janeiro next year,” he said.

In the wheelchair marathon, Kota Hokinoue from Japan became the champion at 1:28:20 after beating defending champion Hong Suk-man, who clocked 1:33:27. The 41-year-old was tabbed as the top contender in the event since he held the highest personal record among participants at 1:20:32.

“It was difficult because Hong had good speed and was chasing me closely from behind,” said Hokinoue, who will collect 5 million won for his victory. “I’m happy to break my own record in my second appearance in the JoongAng Seoul International Marathon.”