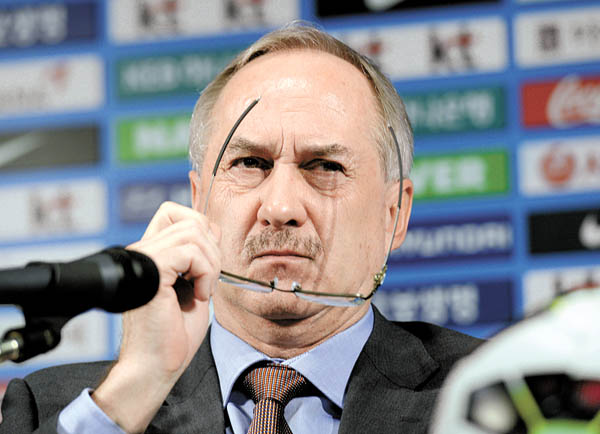 Korea men’s national football team coach Uli Stielike said he is banking on experience and leaning towards players who are developing their game, for national team selection. [newsis]

Tottenham Hotspur’s Son Heung-min and Crystal Palace’s Lee Chung-yong are back on the national team as Korea announced its 23-man squad for the upcoming regional qualifiers for the 2018 FIFA World Cup.

Korea, who are at the top of Group G in the second round of the Asian qualifiers for the 2018 FIFA World Cup with a 4-0-0 record, will host Myanmar on Nov. 12 and play against Laos away on Nov. 17.

The national team previously beat Myanmar 2-0 in June and blanked Laos 8-0 in September.

Although these Southeast Asian countries are thought to be less challenging opponents for Korea, coach Uli Stielike decided to call-up the best players he could.

Both Son and Lee were left out from the national team squad due to injury last month, when Korea faced Kuwait in the World Cup regional qualifiers and a friendly against Jamaica.

Stielike included Son after he heard the 23-year-old forward is back training and is expected to play in a Europa League match this week.

“If Son hasn’t recovered 100 percent, Tottenham will obviously say to us that he isn’t ready play,” Stielike said at the press conference in Seoul on Monday. “We are ... hoping that Son has recovered fully.”

“In March, the K-League players may not be in form, because the league would have just started, but Europe-based players would still be in shape because their leagues are not finished.”

In addition to the two English Premier League players, two players have joined the national team for the first time in their career.

Seongnam FC defender Yun Young-sun will fill the void left by FC Augsburg centerback Hong Jeong-ho who is out due to injury.

Goalkeeper Cho Hyun-woo, who is playing with second division club Daegu FC, will also be wearing the national team uniform for the first time.

For this squad, Suwon Samsung Bluewings midfielder Kwon Chang-hoon is missing as the 21-year-old was called up for the Olympic football team, which is scheduled to participate in the four-nation friendly tournament in China next week.

Stielike said that even though Kwon has played a pivotal role with the national team, he decided not to pick a player who can obviously fill out his role but to select other players who have been developing their game.

“I felt that about 20 players have been doing their job well and even if a player is out for injury, we can fill out the void with existing players,” Stielike said. “When you look at our squad, we have players who can serve multiple roles.”

Stielike said that the depth of the squad is deeper than in the past, but emphasized that competition is still on to decide national team selection.

“The door to the national team is always open, but at the same time, when players are not performing well, the exit is also open,” he said. “No one can be complacent on their current situation.”