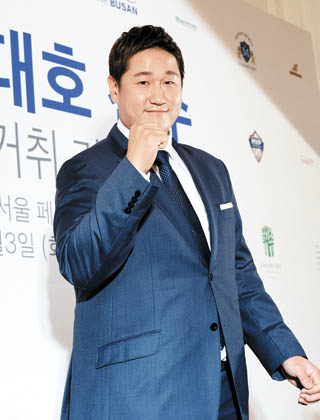 Fukuoka Softbank Hawks slugger Lee Dae-ho poses during his press conference in Seoul on Tuesday. Lee said he wishes to play in the Major League Baseball next season. [NEWSIS]

“Big Boy” wants to go to the big leagues.

Lee Dae-ho, who plays for the Fukuoka SoftBank Hawks in Japan, announced on Wednesday that he wants to play in Major League Baseball for the upcoming season. He feels that, considering his age, this is the perfect time for him to take a shot at playing in the United States.

The 33-year-old slugger, nicknamed Big Boy because of his heavy 1.94-meter tall frame, arrived in Korea on Saturday after helping his club defend their Japan Series title. But before his next destination is determined, he will play for the Korea national team in the Premier 12 international tournament next week.

Lee arrived in Japan in 2012 after signing with the Orix Buffaloes. After moving to the Hawks in 2014, he enjoyed two Japan Series titles. In this Japan Series, the Busan-native was named the series MVP after marking a .500 batting average with two home runs and 8 RBIs.

In his four seasons in the Nippon Professional Baseball league, Lee had a .293 batting average, 98 home runs and 348 RBIs in 570 games.

Lee, a four-time Golden Glove winner in the KBO, said negotiations for a move to a MLB club will be managed by MVP Sports Group, whose clients include top players such as Albert Pujols and Joey Votto. He reportedly had an clause in his contract with Softbank that allows him to go to the MLB.

If Lee succeeds in signing with a MLB club, he will be the first field player to join the MLB after stints in both the KBO and NPB. Previously, Koo Dae-sung, Lee Sang-hoon and Lim Chang-yong went to the big league after playing in Korea and Japan, although they were pitchers.

At a press conference in Seoul on Tuesday, Lee talked about his decision to try for MLB as well as his time in Japan. He also said that Heroes slugger Park Byung-ho’s attempt to join the big leagues through the posting system, will not put him at a disadvantage in signing with a U.S. club.

Q. Why did you decide to try for the MLB?

A. My dream was always to become a major leaguer. Now, that I’m in my mid-30s, I thought it would be difficult if I didn’t make my decision after this year. I talked with my family, but they trusted me as a father. Under the contract, I can play with Softbank until next year, but I had my rights in the contract which allowed me to try for Major League Baseball. If I fail to play in the United Sates, obviously, I will be with SoftBank.

What about timing? When did you decide to attempt a move to the U.S.?

As for playing in the MLB, I was thinking about it when I was going to Japan, but the situation was difficult. So, until now, I focused on winning the championship and playing baseball and thought about my situation. But about four days ago, I started to prepare for a move to play in the U.S. and discussed my thoughts with my agent. 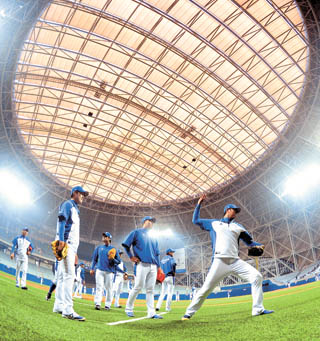 Korea national baseball team players train at the Gocheok Sky Dome in Seoul on Tuesday. The team, which also includes Lee Dae-ho, will have two friendly games against Cuba today and Thursday before the Premier 12 international tournament. Korea opens the tournament against Japan on Sunday. [NEWSIS]

Do you think you can play third baseman?

What do you feel you managed to improve in Japan?

Japanese pitchers pitch a lot of breaking balls. From the first pitch, they sometimes pitch a forkball, so I tried to wait … which made me have a lower batting average. As far as I know, pitchers are aggressive in the U.S. I have succeeded in Korea and Japan, but in the U.S., I will go back to the mindset of a rookie player, with my mind on learning baseball there.

You and Park Byung-ho have both said you want to go to the MLB. What do you think?

I think the best Korean slugger right now is Park. He is a good player. I don’t think either of us will be at a disadvantage because both of us are trying to go to the MLB. I hope we have good results in the MLB next season.

Do you have any league or team in mind? Have you taken any advice from Choo Shin-soo or other players?

I haven’t thought about which club I want to play on. It’s only been two days since I have decided to go to the U.S. I also have yet to hear from Kang Jung-ho or Choo Shin-soo. If I seal the contract, I want to ask them for help.

Your friend Choo Shin-soo started in the minors, but is now having success in the majors. What do you think about him?

Are you going to sign the contract even if the money is below your expectations? What if the contract doesn’t guarantee playing in the big leagues?

Baseball players are happy when they wear a uniform. I can go to any club if they want me. But, I want to play in the major league, not in the
minor leagues.

Japan’s national team manager for the Premier 12 said you were the most dangerous player in the team. What do you think?

I think that’s wrong. There are many good young players in our team. If the Japanese team only has an eye on me, they will have a difficult time. I don’t want to lose international tournaments. I want us to win.

I was really happy for two years. I can’t forget the fans’ passion. When I went to Fukuoka, everybody there liked me. The club, employees, manager and coaches all care about me. Even if I didn’t speak Japanese, I’m really thankful. My goal was to win the championship and since we achieved it, I feel very happy.