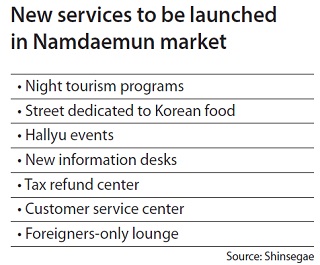 Leading retailer Shinsegae Group announced on Thursday that it would partner with the Seoul Metropolitan Government and the Jung District Office to upgrade the Namdaemun traditional market into a global tourism spot within the next three years.

“We will support the project to revitalize Namdaenum into a global market so that Seoul can develop its tourism offerings downtown,” said the retail giant that runs Shinsegae Department Store and discount chain E-Mart.

Shinsegae cited a survey by IPSOS, a local marketing research agency, conducted in August on foreign tourists visiting Myeong-dong, the bustling shopping area in Jung District where the main branch of Shinsegae Department Store is located.

The survey showed 78 percent of foreign tourists visiting central Seoul thought the area lacked tourist activities other than shopping, and 65 percent answered they would like to try different Korean street food.

The first part of the three-year project will be developing a street inside Namdaemun specifically devoted to Korean food.

Shinsegae said the street will follow the lead of nearby Gwangjang market, which has risen as a must-go place for foreign celebrities visiting Seoul to taste delicacies such as bindaetteok (fried mung bean pancake) and mayak gimbab, or mini seaweed rolls nicknamed for their addictiveness. (Mayak means “illegal drug” in Korean.)

After Shinsegae finishes refurbishing the 37-year-old fountain that stands between its department store and the Bank of Korea headquarters by the first half of 2017, it will develop a tourism program that links Myeong-dong, the fountain and Namdaemun market.

The retailer says its goal is to refashion the fountain and surrounding area into “an attractive tourism symbol similar to the Trevi Fountain in Rome.”

Shinsegae’s tourism-friendly project comes nine days before the Korean government selects who will receive a license to operate one of four licenses to operate a duty-free store in Seoul.

The existing operators - SK Networks, Lotte and Shinsegae - will see their licenses for the lucrative businesses expire at the end of this year.

All the conglomerates fighting to either receive or renew a duty-free license have been unveiling a series of tourism-friendly business projects to curry favor with the government.

Doosan Group, the only conglomerate without a license, revealed plans to revitalize the Dongdaemun area last month.