Choe Ryong-hae may be purged

Choe Ryong-hae may be purged

A list of some 170 officials on the funeral committee for a veteran military official has spawned speculation that Choe Ryong-hae, secretary of the Workers’ Party, might have been removed from power. 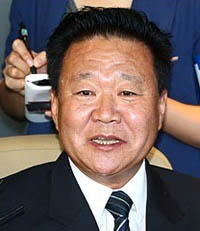 The list of powerful officials involved in the state funeral tomorrow for Ri Ul-sol, one of the two remaining marshals in the Communist country before his death on Saturday of lung cancer, does not include Choe’s name.

Because of Pyongyang’s opacity, the order of names on lists of funeral committees for important figures like Ri gives valuable clues to who has been promoted, demoted or purged from the most elite circle of power in North Korea.

The biggest surprise from the funeral committee list disclosed Sunday was the omission of Choe, who was once considered the right hand man of leader Kim Jong-un, leading to speculation that he has been dismissed or possibly purged from the party. Given his pedigree as a son of a guerrilla who fought alongside late North Korean founder Kim Il Sung, Choe’s dismissal, if true, could mean a “significant change in the power structure” in Pyongyang, said Cheong Seong-chang, a senior fellow at the Sejong Institute. 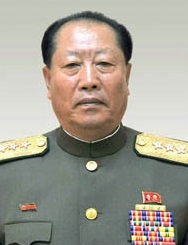 Choe was not seen in a group of officials who accompanied Kim Jong-un on his visit to the mortuary where Ri’s body was laid to rest on Sunday in Pyongyang.

Choe’s position was so significant that he was sent to Beijing as a special envoy in September to attend a Chinese military parade in commemoration of the end of World War II, which was also attended by South Korean President Park Geun-hye.

The omission of his name spurred some to suspect Choe may have been punished for an unsuccessful attempt at mending ties with Beijing when Liu Yunshan, the fifth-most senior member of the Communist Party of China, visited Pyongyang on Oct. 10, the 70th anniversary of the North’s ruling party.

If something did happen to Choe, it must have taken place over the past week since Choe had a column printed in the state-run Rodong Sinmun on Oct. 31 praising the work of the ruling party.

“A list of a state-run funeral committee is an invaluable source to keep track of the current status and changes in the top power circle,” said Cheong. “It is possible that those who didn’t make this list could have been sacked or purged.”

The funeral committee disclosed on Sunday puts Kim Jong-un, the grandson of Kim Il Sung, on top of the power chain as First Chairman of the National Defense Commission, followed by Kim Yong-nam, Hwang Pyong-so, Pak Pong-ju and Kim Ki-nam.

Hyon Yong-cheol, the former North Korean defense minister who was reported by South Korea’s intelligence agency to have been executed in April on charges of being disrespectful for Kim - possibly for falling asleep in Kim Jong-un’s presence at a meeting - was not on the list.

Pyongyang has not verified Hyon’s execution or his whereabouts.

Gen. Choe Pu-il, Minister of People’s Security, who was rumored to be demoted after the deadly collapse of an apartment project last May, made an appearance on the list as the 18th official, which could be seen as his regaining of the trust of North Korean leader Kim.