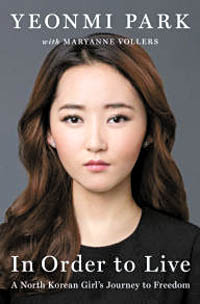 Yeonmi Park has told the harrowing story of her escape from North Korea as a child many times, but never before has she revealed the most intimate and devastating details of the repressive society she was raised in and the enormous price she paid to escape.

Park’s family was loving and close-knit, but life in North Korea was brutal, practically medieval. Park would regularly go without food and was made to believe that, Kim Jong-il, the country’s dictator, could read her mind. After her father was imprisoned and tortured by the regime for trading on the black-market, a risk he took in order to provide for his wife and two young daughters, Yeonmi and her family were branded as criminals and forced to the cruel margins of North Korean society. With 13-year-old Park suffering from a botched appendectomy and weighing a mere 60 pounds, she and her mother were smuggled across the border into China.

Still in her early 20s, Yeonmi Park has lived through experiences that few people of any age will ever know - and most people would never recover from. Park confronts her past with a startling resilience, refusing to be defeated or defined by the circumstances of her former life in North Korea and China. In spite of everything, she has never stopped being proud of where she is from, and never stopped striving for a better life. Indeed, today she is a human rights activist working determinedly to bring attention to the oppression taking place in her home country.

Park’s testimony is rare, edifying, and terribly important, and the story she tells is heartbreaking and unimaginable, but never without hope.