Duty-free industry in crisis of stagnation

Duty-free industry in crisis of stagnation 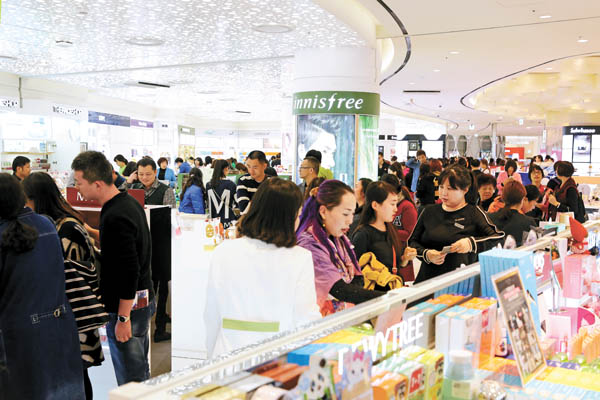 Thousands of jobs are under threat in the wake of the Korea Customs Service’s shock decisions last Saturday in awarding duty-free licenses in Seoul.

A total of 2,200 workers are on the verge of losing their jobs at the two operators.

The selection process for duty-free outlets has been criticized as it mandates renewal every five years. Some observers feel this goes against the Park Geun-hye administration’s creative economy drive, which has a key premise of creating jobs by letting companies freely enter promising industries.

Other affiliates under the Lotte Group umbrella have guaranteed that they will hire workers from the duty-free stores, and new operators - Doosan, Shinsegae and Hanwha (selected in the summer) - have promised to absorb those from SK.

Regardless of the commitments, a sense of insecurity lingers among new and old duty-free store operators because of the uncertainty over duty-free license renewals in five years.

Han Gyeong-ran, 49, has worked at Lotte’s World Tower branch for 17 years. She is a sales manager at a small-size jewelry brand inside the outlet, but now that the entire store is shutting down in six months, she will lose her job because the jewelry brand is housed at the Jamsil outlet and not the Sogong branch, which will remain intact.

“I am just at a loss, not knowing what to do to provide for my old age,” she said.

“I don’t know how you could say getting rid of a company that has invested 300 billion won for a single duty-free outlet and depriving those employees of jobs is what the government describes as job creation.”

Last year, when Lotte lost its duty-free license at Gimhae International Airport in Busan to Shinsegae and shut down the store, only half of the 390 Lotte employees were transferred to Shinsegae.

“There are many lawmakers who have remained silent over the verdict this time on the duty-free shop licenses for fear of being mistaken as defending those companies that failed,” said Lee Hahn-koo, a lawmaker with the ruling Saenuri Party. “After proclaiming it would produce more jobs, the government is actually doing the opposite, which is preposterous.”

Before the Park government introduced a new system in 2013 that put each license up for open competition every five years prior to expiry, renewal for downtown duty-free shops was a semi-automatic, rubber-stamping process for 10 years at a time.

Martin Moodie, chairman of the Moodie Report, a U.K.-based online publication devoted to the global travel retail and duty-free sector, told some Korean media outlets in 2013 that weakening duty-free shops in their home market “seems a misguided and short-sighted step.”

“The five-year deal is a disaster and will kill what little quality there is. The margin pressure on brands will get far worse, too,” a senior executive for one of the world’s leading luxury brands was quoted as saying by the Moodie Report on Sunday.

He added that some leading brands may opt in the future to position themselves in Korean domestic stores with permanent high-quality environments rather than facing a potential change in duty-free retail partners every five years, given there is “no difference between Korean duty-free and tax-refund pricing [depending on foreign exchange rates].”

Companies that had their license renewed or newly issued may not have time to celebrate as stumbling blocks lie ahead.

A group of lawmakers led by Rep. Hong Jong-haak from the main opposition New Politics Alliance for Democracy has proposed a revision of a bill that will force duty-free store operators to pay 100 times the licensing commission they are paying now - from 0.05 percent of annual revenue to 5 percent.

That means the Sogong branch of Lotte Duty Free will have to pay 10 billion won in commission to the Korea Customs Service each year after the revision, when it currently pays 1 billion, or 0.05 percent of the 2 trillion won annual revenue.

If approved, the move will inevitably force duty-free shops to hike the prices of goods, which will lead to Korea becoming less attractive to tourists, particularly big-spending Chinese, and shrinking tourism to Korea.

The Korean government’s process goes against systems in Europe and neighboring countries such as China, Japan and Taiwan, which have been ramping up their duty-free industry as its golden goose that draws huge foreign currencies.

The Korean duty-free business has grown exceptionally in the last five years. Earnings from duty-free have exceeded that of China and the United States and held the No.1 spot since 2012. According to a survey by the Korea Tourism Organization, the biggest reason foreigners visit Korea was to shop. In fact, 72 percent of the poll picked shopping. As a result, the Korean duty-free business raised $7.78 billion last year.

But a change in duty-free licensing regulations will force companies to become very cautious in their investment strategies and wary of business expansion.

Lotte was not alone in heavily investing in expanding its duty-free business. Walkerhill recently invested 100 billion won in doubling the size of its duty-free stores. It was scheduled to open up next month.

The licensing regulation is also likely to affect future plans, even for newcomers such as Doosan.

“It takes a huge amount of investment when starting a duty-free business, and it takes a minimum of 10 years before it settles,” said Choi Young-soo, former chairman of the Korea Duty Free Association and former vice president of Lotte Hotel in charge of the duty-free business. “If you have to get government approval every five years, who would invest a large amount and even hire regular employees?

“When doing business whose main customers are foreigners, whether a company monopolizes is meaningless. If we continue with such a policy, we will loose the Chinese tourists to the Japanese.”

Han Enny, CEO of Enny Trading Corporation, which supplies cosmetics to duty-free stores including Lotte and Walkerhill, was frustrated at the recent licensing decision.

“We have products shipping in that we plan on supplying to the duty-free stores next spring, but it seems we would have to cancel those orders,” Han said. “We have built our credibility for years just to get a contract with foreign companies, but it seems it’s all going to crumble.

“Luxury companies’ products that have high demand from Chinese consumers make trade relations based on long-term trust, but if this continues, they wouldn’t be interested in opening up stores in Korean duty-free stores.”

Other countries have been taking the opposite direction in their strategies as they have realized how lucrative duty-free businesses can be.

As of last year, the world’s top four duty-free companies accounted for 25 percent of the duty-free market, a sharp increase from the 16 percent in 2010.

“The duty-free business in a core pillar in a country’s tourism industry development,” said Kim Seung-wook, a economics professor at Chung-Ang University. “The customs service agency needs to focus on lowering the entry level of duty-free stores and think more on ways to help foreign tourists open up their wallets, rather than focusing on regulations.”