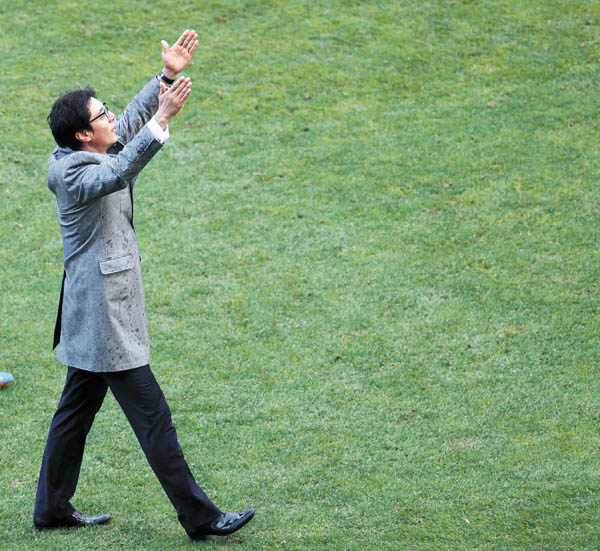 Pohang Steelers fans were shocked last month when coach Hwang Sun-hong announced he will leave the club after this season to take a break in his coaching career.

Pohang on Monday said Choi Jin-cheul, who led Korea to Round 16 at the FIFA U-17 World Cup in Chile last month, will succeed Hwang. Hwang, however, will still be in charge until the team’s final match of the season, and is hoping to wrap up his stint with the club with a victory.

Since Hwang took the helm in 2011, the Steelers have never finished below fourth place. During his tenure, the Steelers won the FA cup in 2012 and the double crown (league and the FA Cup) the following year.

Hwang, who also played with Steelers from 1993 to 1998, was a prolific striker in Korean football in the 1990s. He scored 50 goals in 103 matches for Korea, as part of the national team that reached the semi-finals in the 2002 FIFA World Cup.

Before landing in Pohang, the port city in North Gyeongsang, he served as an assistant coach for the Jeonnam Dragons from 2003 to 2006 and was Busan I’Park coach from 2008 to 2010.

Looking back on his years with Pohang, Hwang said in an interview with Ilgan Sports earlier this month that he feels a little regret for the team’s AFC Champions League performance. But the 47-year-old emphasized that this is not the end of his coaching career.

For this season, the K-League Classic championship is already in hands of Jeonbuk Hyundai Motors, but the Steelers are aiming for second place finish.

The team is currently one point behind Suwon Samsung Bluewings in the league standings with 17 wins, 12 draws and eight losses.

The Steelers last match of the season is on Sunday at home against FC Seoul. Though the match was supposed to be important for two teams vying for the AFC Champions League ticket, the situation has changed as Seoul secured the spot by winning the FA Cup over Incheon United last month.

Still, Hwang said he will try his best to win his last match with the Steelers.

Q. What went through on your mind when you decided to leave the club?

A. I thought about my players who endured all these times with me, but I couldn’t protect them. Players like Hwang Jin-sung [Fagiano Okayama], No Byung-jun [Daegu FC], Kim Hyung-il, Shin Hyung-min, Yoo Chang-hyun [all with Jeonbuk Hyundai Motors] and Kim Jae-sung [Seoul E Land FC] are players who have been with Pohang even before I came here, but they left the club because of various situations. I’m sorry for not being with them until the end.

What are your regrets in leaving the club?

What was the most regretful moment in AFC Champions League?

Do you think the final match against Seoul seems to have lost some intensity?

For the last two seasons, we were leading the league atmosphere, but this year, it became a little silent. Honestly, I wanted Seoul and its coach Choi Yong-soo to fight intensely until the end. So I was hoping that the AFC Champions League ticketwould be determined in the season’s last match. But since Seoul won the FA Cup, this kind of atmosphere is gone.

What can you say about coach Choi?

We were very friendly together during the 2002 FIFA World Cup. Back then Hong Myung-bo was captain, so he had to get along with young players, but I didn’t have much time to spend with young players. So I got along with some heavyweights like Choi, Choi Jin-cheul and Ahn Jung-hwan. I feel happy that Choi is successful as a coach. He has a very good ability as a coach and that’s why he got the title. He is a coach who can produce better results in the future.

Do you guys talk to each other frequently?

This season, Choi always called me in the morning of his match day. So one day, I asked him, ‘why do you keep calling me? Are you trying to get special energy from me?’ He didn’t answer my question, but just laughed. Interestingly, when I received his calls, Pohang also had good results, so we exchanged our calls frequently. However, before the FA Cup final, I didn’t get a call from him. Maybe he didn’t want to do it after news came out that I was going to leave after this season. After Seoul won the FA Cup, I sent him a text message to congratulate him, and then he answered me with a simple message: ‘No more do-or-die match between us!” (laughs).

What are your plans after this season?

I have been a bad father. I didn’t spend much time with my family and even when I’m with them, I watch video clips of football matches. My wife even told me to go back to the clubhouse to watch videos. I was just sitting in my room [watching football] and always felt sorry because I had little conversation with my children. My daughter, who is attending New York University, is going to be a sophomore and I want to serve my role as a father. At the same time, I will think about which league and club I would join for coaching programs. I want to carefully prepare for the next stage of my football life.