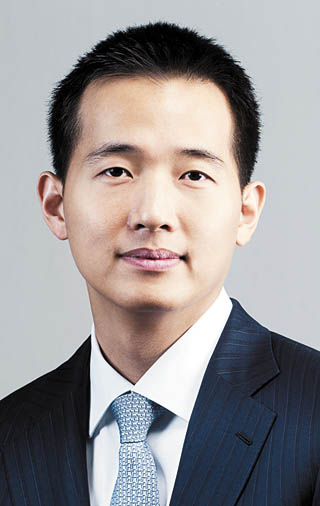 In a reshuffle announced by Hanwha on Sunday, the 32-year old Kim, who is considered the heir apparent of Hanwha Group Chairman Kim Seung-youn, was credited for the success of the group’s solar power business, one of its important new growth sectors.

It is expected to grow even more considering the contracts it already has for next year.

“Kim led Hanwha’s solar power affiliates and helped the company grow into the world’s No. 1 solar power company in terms of production,” said a spokesman of Hanwha. “He also led many big projects including a supply contract with NextEra of the United States.”

Kim, the eldest of the chairman’s three sons, joined Hanwha Corporation in January 2010 and worked at Hanwha Solar from December 2011 to July 2013. He became marketing director for Hanwha Q Cells in August 2013. Since March of this year, he has been working as a senior vice president at Hanwha Q Cells.

Hanwha may be accelerating the succession process because of the legal woes of Chairman Kim Seung-youn. He is officially not working since he was convicted of breach of trust for illegal intra-group financial transactions in 2011, although in February 2014, the Supreme Court suspended his three-year prison term for five years.

Hanwha Group also announced promotions of 113 other executives for next year. Kim Nam-ok, a senior vice president at Hanwha General Insurance, was named as the group’s first female senior executive vice president. Kim, who didn’t attend high school or college, was able to climb the ladder through professionalism and performance, the company said. Working as director of Hanwha Insurance’s Masan, Busan, Gyeonggi and Incheon regions, she significantly improved the offices’ balance sheets. “The reshuffle was carried out based on performances and many people in sales, new business development and R&D were promoted,” said a spokesman of Hanwha.