Victim of sexual slavery passes away of old age

Victim of sexual slavery passes away of old age 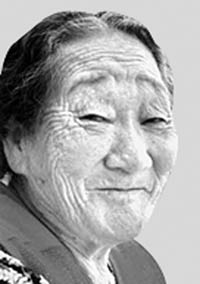 Choi Gap-soon, a 96-year old woman forced to work in Japanese military brothels during World War II, passed away Saturday, according to a civic group supporting the victims of sexual slavery.

Choi’s death brings the number of the surviving women registered with the Ministry of Gender Equality and Family as victims of sexual slavery down to 46 from an initial 238. They are euphemistically called comfort women. Eight other comfort women have died this year.

Choi, who had been suffering from illness due to old age, died at Namyangju Hanyang General Hospital in Gyeonggi on Saturday morning.

Born in 1919 in Gurye County, South Jeolla, she was taken away from her family at the age of 15 by a Japanese policeman, who had originally wanted to send her father into forced labor. Choi left her family because she realized her father was struggling to feed a family of eight. She was forced to move to Jeonju, North Jeolla, and then to Manchuria, where she was coerced into sexual slavery.

Following Korea’s liberation from Japan in 1945, Choi was freed from nearly 10 years of sexual slavery but lived another four years as a beggar and a peddler. She finally returned to her hometown and earned a living by farming.

“She has gone to heaven without hearing any apology from those who committed sins,” said the Korean Council for the Women Drafted for Military Sexual Slavery by Japan, sending condolences for Choi’s death. “The Japanese government has to make a formal apology and provide legal compensation as soon as possible in order to take loads off these ladies’ wounded hearts.”

The sex slaves issue is a major point of friction between Korea and Japan. President Park Geun-hye and Japanese Prime Minister Shinzo Abe met on Nov. 2 and said they would try to resolve the issue soon.