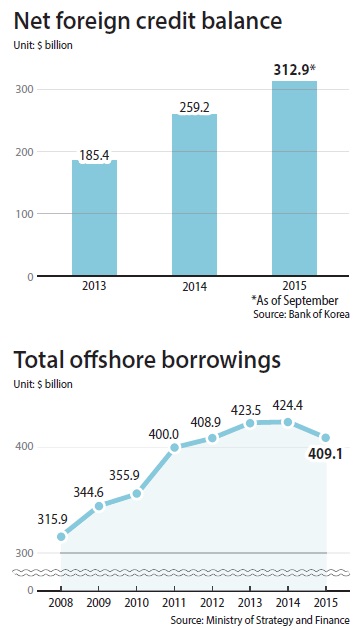 Korea’s net foreign assets surpassed $300 billion for the first time in its history, largely thanks to reduced overseas borrowings, data by the Bank of Korea and Ministry of Strategy and Finance showed on Monday.

The figure indicates that the country now has more assets abroad than it has borrowed from other countries, implying more robust foreign exchange reserves.

As of September, the net amount of foreign bonds held by the Korean government recorded $312.9 billion, its largest volume ever, the central bank said. The figure refers to the amount of money Korea has invested in other countries, minus the amount it has borrowed.

The country’s net international investments stood at $191.7 billion as the end of September, up $58 billion from June.

Overseas assets purchased by the government also posted the greatest volume at $722 billion as of September, up $5.1 billion from three months earlier. The country’s overseas borrowings and debts shrank to $409.1 billion.

Among the borrowings, short-term overseas bonds amounted to $119.6 billion, down $5.6 billion from a quarter earlier. The short-term borrowings accounted for 29.3 percent of the total borrowings, data by the Finance Ministry showed. The percentage also fell 0.3 percentage point from three months before.

The decline was attributed to local financial institutions’ repayments of outstanding foreign loans and less foreign investments in Korean bonds, the ministry said.

“Compared to the country’s foreign exchange reserves, the proportion of short-term borrowings is 32.5 percent, which is a very low level,” said Yoo Byung-hoon, head of overseas investment statistics at the central bank.

“The fiscal soundness of the country’s overseas assets has improved significantly,” said the Finance Ministry in a report. “Amid the impending interest rate hike in the United States, there are possibilities of amplifying uncertainties in the financial market.

“The government will continue monitoring foreigners’ investments in Korean bonds in order to keep its overseas assets sound,” it added.