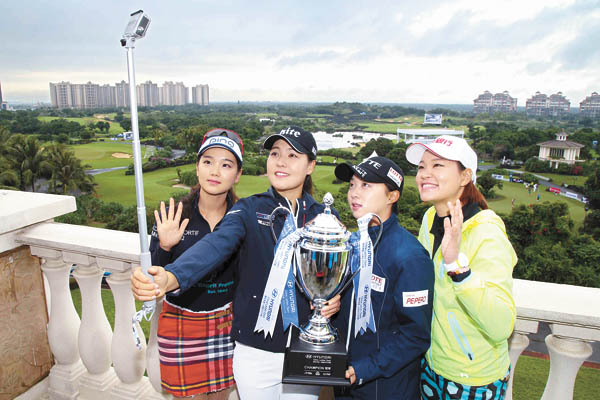 It’s the battle of the KLPGA MVPs at the Hyundai China Ladies Open, which begins today in Hainan, China.

Kim Hyo-joo, the KLPGA MVP from 2014, and Chun In-gee, this year’s winner, are squaring off at the 10th anniversary of the event, which is co-sanctioned by the KLPGA and China LPGA Tour.

The Hyundai China Ladies Open starts with 108 golfers at the Mission Hills Golf Club and offers a total purse of $550,000. Though the event is held in 2015, it’s considered the 2016 season opener for the KLPGA Tour because the results achieved here count towards records for 2016. Fifty-two Korean golfers will compete.

The highlight in this event is the matchup between Kim and Chun. Both are paired in the same group as China’s Yan Jing.

Kim and Chun are having similar careers. They’ve each dominated the KLPGA Tour and won major titles before going on to the LPGA Tour.

After Kim left for the United States, Chun conquered the local tour just as Kim had done. The 21-year-old was named MVP of the 2015 season, finishing first in prize money (900 million won), wins (5), and scoring average (70.56). In July, she won the U.S. Women’s Open as an invited player and will join the LPGA Tour next year.

Kim and Chun were rivals in 2013, when they were both rookies.

Comparing their best years in the KLPGA Tour, Kim was better not only in prize money and scoring average, but also in top-10 finishes. In 2014, Kim finished in the top-10 in 78.26 percent of her events, higher than Chun’s 55 percent in 2015.

This will be the second time the golfers have faced off at the Hyundai China Ladies Open. Last year, Kim and Chun were co-leaders until the 14th hole of the final round, but in the end, Kim edged Chun by two strokes to finish with a tournament record of 14-under 202. It was the second time Kim claimed the Hyundai China Ladies Open, also doing so in 2012.

Kim has been especially strong in China, as four of her nine career KLPGA Tour wins were achieved there. In addition to her victories at Hyundai China Ladies Open, she also won the Kumho Tire Ladies Open in 2014 and 2015 in Weihai, China.

But Kim, who finished second in the LPGA Rookie of the Year behind Kim Sei-young, seems to have developed stamina problems in the second half this season, withdrawing from two events in October. The winner of the JTBC Founders Cup will return to Korea after this event before going to Thailand for off-season training.

Chun this year had more flashy moments than Kim, as she also claimed two major titles in Japan, the Salonpas Cup and Japan Women’s Open. But she’s also been struggling at the end of season with a shoulder injury. She has slowly recovered her form by playing events like the Queens team-golf tournament last weekend, where Korea took second behind Japan.

While all eyes will be on the rivalry between Chun and Kim, other Korean golfers are also preparing to wrap up this year strong.

Park Sung-hyun, who collected three wins and was second in prize-money rankings, will compete. The 22-year-old, who also tied second in the LPGA KEB Hana Bank Championship two months ago, is paired with China’s Pan Yanhong and Shi Yuting.

Kim Hye-youn, who triumphed in this event in 2010 and 2011, is also considered a top contender. The 26-year-old, who has one victory in 2015, will tee off with Ha Min-song, who collected her first KLPGA Tour victory in August, and Taiwan’s Kuo Ai-chen.

KLPGA Tour winners Choi He-yong, Kim Min-sun, Oh Ji-hyun, Choi Hye-jung and Kim Bo-kyung are also all in this tournament, as well as Park Ji-yeon, who collected four wins and the prize money title in second-tier Dream Tour this season.

However, Lee Jung-min, who has finished second in the MVP award for two years in a row, and Cho Yoon-ji, third in the 2015 prize money list, as well as the 2015 KLPGA Rookie of Year Park Ji-young will not play.