Banned Park still has his sights set on Rio

Banned Park still has his sights set on Rio 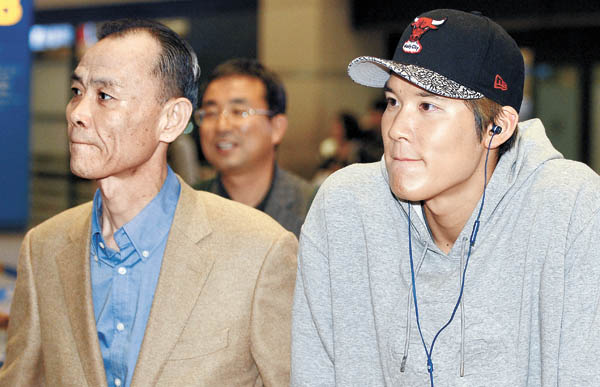 Swimmer Park Tae-hwan, right, and his coach Roh Min-sang arrive at Incheon International Airport on Saturday after finishing his training in Japan. [NEWSIS]

Suspended swimmer Park Tae-hwan is still hopeful that he will be able to compete in the 2016 Summer Games in Rio de Janeiro.

Returning to Korea on Saturday from Japan - where he has been training with coach Roh Min-sang - Park said, “I’ve been training really hard for the last three months. Before I went to Japan, I had been building my physical fitness with coach Roh. [In Japan] I raised my condition and focused on upgrading durability.”

The 26-year-old Park is currently under suspension after he received an 18-month ban from FINA, the international swimming governing body, for testing positive for testosterone on Sept. 23, 2014. The six medals he won at the 2014 Asian Games in Incheon were disqualified.

The 2008 Olympic gold medalist in the men’s 400-meter freestyle had been working out at a public pool in Seoul since June, but could only train two hours a day as it had to be available for public use.

Park then planned to train at Hosei University in Tokyo, where he previously trained in 2007 prior to the 2008 Beijing Summer Games. However, the two-time FINA World Championship winner couldn’t reach an agreement with the Japanese university and instead settled in Osaka.

Park has been training at the outdoor pool in Osaka, which has international standard 50-meter (160-feet) lanes. From December, he moved to an indoor pool which has a 25-meter lane pool under the training program set by Roh.

The 59-year-old coach went to Japan last week to check his training status.

“His fitness is better than when he was preparing for the 2008 Summer Games,” Roh said. “I focused to upgrade his stamina with an intense training program. The weather was alright, and his chronic shoulder pain also got better.”

Park’s suspension ends on March 2, 2016, but under the FINA rule, he is allowed to train at national facilities two months before the expiration of his punishment.

But first, the 1.83-meter swimmer, nicknamed “Marine Boy,” will train at the Olympic Swimming Pool in Songpa District, southern Seoul, from this week. The public pool is associated with neither the Korea Swimming Federation nor the Korean Olympic Committee.

“The first phase of his training is completed,” Roh said. “The pool conditions for Park aren’t good, so we will solve this step by step.”

Park, who has six gold medals in the Asian Games, has been claiming he was injected with an illegal substance named “Nebido” without his knowledge and is suing a doctor who gave him the shot.

Local prosecutors last month recommended a 10-month jail term with a fine of 1 million won ($850) for the doctor. The court will rule on the doctor’s sentence on Thursday.

Although Park is working to get in shape for the Summer Games, it is still unclear whether he can compete in Brazil.

Under a rule from the Korean Olympic Committee (KOC), athletes who have served a drug suspension are ineligible to compete for the country for three years, starting on the day the suspension ends.

Some people have been pushing the KOC to scrap the rule, as they feel it punishes the athlete twice. The KOC recently said it will discuss possible adjustments to the rule in March after it finishes administrative issues to unify the local sports federations.

“I don’t know how things will turn out in the future, but I will keep trying to show good form,” Park said.