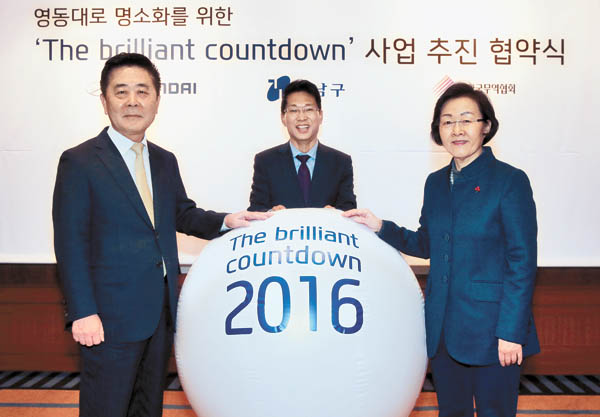 Officials from Hyundai Motor, KITA and Gangnam District Office celebrate the MOU for “The Brilliant Countdown” on Friday. NEWSIS

Yeongdong Boulevard is the place to count down 2015 and celebrate the new year.

Those who wish to experience a large-scale countdown event on New Year’s Eve this year may hit Yeongdong Boulevard. It’s the road leading from Yeongdong Bridge, which runs from Seongsu, Seongdong District, to Samseong-dong near COEX and Gaepo-dong, Gangnam District, in southern Seoul.

The Korea International Trade Association, Hyundai Motor and the Gangnam District Office has sealed a memorandum of understanding to co-host “The Brilliant Countdown,” with fireworks and an assortment of other events.
The main event will take place in the road leading from Yeongdong Bridge.

Hyundai Motor has been holding year-end festivals since 2011 in the Gangnam Station area and is relocating the event to the largest boulevard in Seoul this year. The top automaker, headquartered in Yangjae-dong, southern Seoul, is set to break ground as early as the second half of 2016 for a new building previously owned and occupied by the state-run Korea Electric Power Corporation in Samseong-dong. Some 1,000 employees at six Hyundai affiliates are scheduled to move into the new building.

The Gangnam District Office has previously shut down the road to accommodate crowds during the World Cup and most recently saw the pilot operation of driverless vehicles and locally developed drones on a 3-kilometer (2-mile) route.

Organizers hope the event will grow to compete with the year-end festival held at Bosingak in Jongno District, where a crowd of thousands gathers to hear the historic bell chime in the new year at the belfry.

The Korea International Trade Association will open the COEX parking lot for free to the public on the night of the event and extend operating hours of the COEX shopping mall. On Christmas Eve and Christmas Day, Santa Clauses will visit.