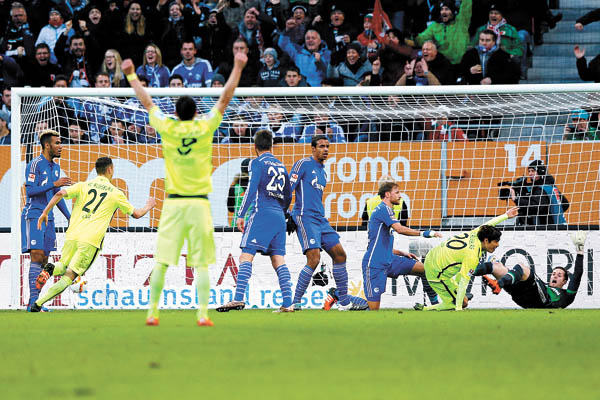 FC Augsburg’s Hong Jeong-ho scored his debut goal in the German Bundesliga last weekend, as the defender helped his team to a 2-1 victory over FC Schalke 04.

In the match at the club’s home stadium, WWK Arena, on Sunday, Hong started as central defender along with compatriot and attacking midfielder Koo Ja-cheol.

Hong delivered his team’s opening goal at the 34th minute. After a corner kick, Augsburg midfielder Dominik Kohr shot from the penalty area. Hong managed to deflect the ball’s direction with his left ankle which swept past Schalke goalkeeper Ralf Fahrmann.

Though it was a deflection of Kohr’s shot, it was officially Hong’s first goal in the German Bundesliga. The 26-year-old Korean joined the team in Sept. 2013.

It was also Hong’s second goal in two matches. The former Jeju United player scored with a header last week in the UEFA Europa League match against Partizan to get his first goal for the club.

Hong’s goal didn’t give the lead to Augsburg until the end of the match. FC Schalke, who have also qualified for the Europa League’s Round of 32, scored the equalizer on the 70th minute after Sead Kolasinac scored.

Augsburg later put Korean forward Ji Dong-won at the 74th minute to push the offense, but it was the team’s Brazilian forward Caiuby who became the hero after he struck at the 92nd minute to seal the victory.

The win was Augsburg’s first home league win since September, and they jumped to the 13th position in the league table with four wins, four draws and eight losses.