Once-forgotten palace back in the spotlight

Once-forgotten palace back in the spotlight 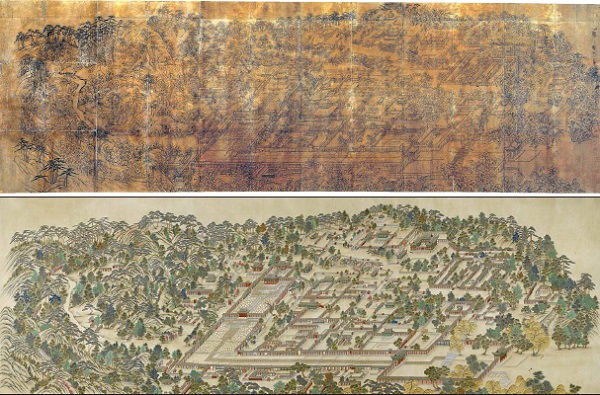 Top: “Seogwoldo (Drawing of the Western Palace),” Treasure No. 1534, is believed to have been made before 1829. Above: This modern rendition was painted by Song Gyu-tae in 2009. [SEOUL MUSEUM OF HISTORY]

There are five main palaces in central Seoul from the Joseon Dynasty (1392-1910), and most would agree that the least familiar one today is Gyeonghui Palace (or Gyeonghuigung), located next to the Seoul Museum of History in Jongno District, central Seoul.

The venue recently made headlines when Italian luxury brand Prada built a large architectural structure next to the palace for its “Prada Transformer” exhibition in 2009.

But during the Joseon era, especially during the latter part, this palace and Changdeok Palace were undoubtedly the two most important sites of the royal affairs.

Unfortunately, most of the structures of Gyeongbok Palace, often considered the main seat of Joseon, were burned down at the end of the Japanese invasion known as the Imjin War (1592-98), and it wasn’t until the late 1800s that the palace was restored.

In those days, Gyeonghui went by the nickname Seogwol (western palace) and Changdeok was called Dongwol (eastern palace), indicating their locations in relation to Gyeongbok Palace.

But in the final years of Joseon and the ensuing period of Japanese colonization (1910-45), many structures of Gyeonghui were demolished or moved elsewhere, as the Japanese built a school and government residences on the palace grounds. As a result, the palace we see today is significantly smaller than its original size.

An ongoing exhibition at the Seoul Museum of History, titled “Gyeonghuigung Palace Still Lives,” sheds light on the forgotten palace’s glory days with about 200 artifacts, including stone monuments, signboards with calligraphy, royal paintings and documents.

“We found traces of Gyeonghui Palace scattered around and put them together for the exhibition,” Jeong Su-in, a representative of the museum, said. “The palace was loved by many kings like Sukjong [1661-1720], Yeongjo [1694-1776] and Jeongjo [1752-1800] and was the equivalent of Changdeok Palace. We hope the show will help people rediscover Gyeonghui Palace.”

Gyeonghui Palace was built in 1620, the 12th year of Gwanghaegun (1575-1641), or Prince Gwanghae, but he actually never got to live there. In fact, Gyeonghui Palace’s heyday was during the reigns of Sukjong, Yeongjo and Jeongjo, according to museum officials.

On display at the exhibition is the painting of the palace (Treasure No. 1534). The painting is believed to be from before 1829 and shows the remarkable size and splendor of the palace that can no longer be seen today.

“At Changdeok Palace glitters a black crow, and at Gyeonghui Palace shines a golden rabbit,” King Yeongjo once wrote, and his particular affection toward the palaces is evident in the words. Both animals were traditionally considered auspicious creatures.

A calligraphy piece by King Yeongjo (1694-1776), who is known to have been particularly fond of Gyeonghui Palace, is on display at the exhibit.

Also on display at the exhibition are these very writings of King Yeongjo, as well as a royal depiction (Treasure No. 1531) of a 1765 banquet that King Yeongjo held at several venues in the palace.

Other notable exhibits include a recreation of the half-moon-shaped artificial stone pond currently at the Sungkok Art Museum, the site of which was part of Gyeonghui during the Joseon era.

“We learned in the process of preparing this exhibition that the pond was originally at Chunghwajeong [a pavilion] in Gyeonghui Palace,” the museum said in a press release. King Sukjong is known to have built the pavilion in 1704 to enjoy the flowers at the palace, and he even wrote a poem titled “Looking at the Half-Moon-Shaped Pond at Chunhwajeong.”

Also on display is the original signboard with calligraphy that was hung at Sungjeongjeon, which was the main throne hall of Gyeonghui Palace. Sungjeongjeon is today part of Dongguk University. Visitors can also see the stone turtle that was originally at the base of a bridge in Gyeonghui Palace but is currently at Seoul High School.

The “Gyeonghuigung Palace Still Lives” exhibition runs until March 13. Admission is free. Opening hours are from 9 a.m. to 8 p.m. on weekdays and 9 a.m. to 6 p.m. on the weekend. The museum is closed on Mondays and New Year’s Day. For more information, call 02-724-0274 or visit www.museum.seoul.kr.