Golfing ‘Santa’ is top-ranked for charity

Golfing ‘Santa’ is top-ranked for charity 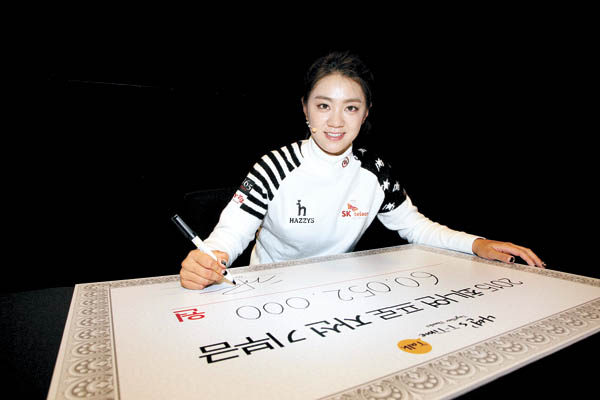 Golfer Choi Na-yeon signs a donation check during her fan meeting in Seoul on Dec. 6. Choi and her fans are donating 60 million won (50,000 dollars) this year. [SEMA SPORTS MARKETING]

During the season, top golfer Choi Na-yeon focuses on winning games and collecting prize money. When the season is over, however, she puts her mind to charitable work and sharing her good fortunes.

And her fans have nicknamed her “Santa Claus on the green.”

After the LPGA season finished at the end of November, Choi returned to Korea and immediately got involved in charitable activities. The 28-year-old held an auction of her belongings at a fan meeting on Dec. 6, which generated 30 million won ($25,000). She later doubled the money raised with 30 million won out of her own pocket.

From the 60 million won fund, 20 million won was given to disabled swimmer Kim Se-jin, who is also known as the “robot leg swimmer” in Korea, on Dec. 8. Ten million won was delivered on Dec. 15 to the Seocho District Office in Seoul to help people in poor neighborhoods prepare for the winter. She also gave 30 million won to local social enterprise Happy Dosirak to help provide meals for children in need.

This isn’t the first time Choi has been involved in donations. She has taken an active part in charitable work since turning pro in November 2004, when she began collecting prize money from events.

In 2012, the year she won the U.S. Women’s Open, her only major title so far, Choi became an Honor Society member of the charity organization Community Chest of Korea. She is the first pro golfer to become a member, which is awarded to those who have donated at least 100 million won.

“I’m happy that I can share with someone,” Choi told the JoongAng Ilbo on Dec. 16 before leaving for the United States. “I think donating is addictive because the more you share, the more you get warmhearted.”

Choi, who joined the LPGA Tour in 2008, said that her role model is retired golfer Lorena Ochoa, who is also known for her charity through her foundation along with her 27 wins in the LPGA Tour.

Choi met Ochoa at this year’s Lorena Ochoa Invitational and had the chance to hear about the 34-year-old Mexican’s foundation.

Choi, a Hwaseong-native golfer who earned $810,000 this year in the LPGA Tour, said her dream is also to run a foundation, but since the tour is so time-consuming, it is a difficult task.

“The scale of her [Ochoa] foundation was really big, as it leads to building schools and medical support,” Choi said. “You can’t run a foundation on your own, so I have a lot of respect for her.”

Choi had been known for her boyish short-haired looks and wearing pants. This year, her style showed signs of change as she grew her hair longer and started wearing skirts.

“I’m now at an age where I should look like a lady and beautiful,” she said. “I gained confidence because people liked my long hair. I’m about to grow a year more, and I’m wondering how people will think about my hairstyle.”

Choi, who has nine wins in the LPGA Tour and eight wins in the KLPGA Tour, said that this year, she became mentally stronger. For the first time in her 19-year golf career, she had to take a rest for two months due to an injury. She skipped five events this summer for a lower back disk problem, where she spent some time in hospital.

She said it was difficult having to recuperate while looking at her clubs. “It was really painful, but I realized how much I love golf,” she said.

The injury has been holding her back since last year. The 2010 LPGA money leader and scoring champion made a comeback this year to win the season opener Coates Golf Championship in January and the Walmart NW Arkansas Championship in June. The injury knocked off her rhythm, but she said it has changed her plans for retirement.

“About two or three years ago, I thought I should set up the time for retirement, but the injury has changed my mind,” she said. “I want to play golf as long as I want and want to be remembered for a long time.”

Choi finished the season as the world’s No. 19 ranked golfer, which is the ninth highest among Korean golfers. But this isn’t enough for her to qualify for the 2016 Summer Games in Rio de Janeiro, as the top four ranked golfers in the nation participate.

Choi is behind Park In-bee, Ryu So-yeon, Kim Sei-young, Yang Hee-young, Kim Hyo-joo, Chun In-gee, Jang Ha-na and Lee Bo-mee. She needs to raise her ranking until July 2016 to have a shot for an Olympic medal, but Choi said that she won’t rush her game. “I will prepare and focus around big events to raise my rankings,” she said. “I want to go to next year’s Olympics, but if that doesn’t work, I will try for the 2020 Olympics.”