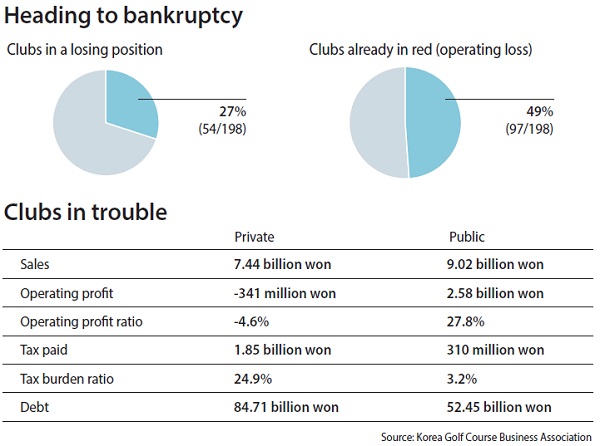 Korean golfers have ruled the world this season, but that’s not putting a smile on the faces of local golf course owners.

According to data released by the Korea Golf Course Business Association (KGBA) last Monday, 27 percent, or 54 of the nation’s 198 golf clubs, are losing money, while 49 percent, or 97 of them, are already in the red.

“Entering this year, the loss for golf clubs is getting bigger, and they are quickly heading to bankruptcy,” KGBA public relations director Lee Jong-kwan said.

Membership-based private golf clubs in Korea have a different system than in most Western countries. Although the membership basically gives buyers the right to use the golf club, people have been selling their private club memberships for a profit. Only Korea and Japan allow this system.

In private golf clubs in the United States or United Kingdom, golfers are charged a registration fee and annual membership fee, but users don’t trade or sell their memberships.

About 10 years ago, local golf course developers were able to pay off their construction costs by selling expensive memberships. Those who bought a membership played for a cheaper price and later sold on their membership.

When the membership of certain golf clubs gained popularity, the owners and members were pleased because the value of their membership went up and they could make larger profits.

However, unlike real estate or stock, the membership isn’t a commodity. As the profitability of private golf clubs gets worse, the value of memberships also goes down, with some memberships now falling below the original buying price.

Many members have given up their memberships and asked golf clubs for a refund on the original price.

But as many golf clubs don’t have the income, the refund requests are pushing clubs into trouble.

Meanwhile, the profitability of private golf clubs is getting worse. They cover the individual consumption tax of members and offer discounted prices to members. Their comprehensive real estate tax is also about four or five times more expensive than public golf courses.

“With many golf clubs, the discount competition for the green fee is fierce,” Lee said.

“With revenues going down, the private golf courses have to pay more taxes than the public golf courses, and this makes it difficult for them to make profit.”

The worsening situation is pushing some golf clubs into bankruptcy.

“We are working hard to survive on our own and improve the image of golf so that many people can play,” the KGBA said. “The government should also come up with a plan to foster the golf industry.”

Industry insiders said the golf community and government should come up with a plan regarding taxes.

“It doesn’t seem to be right these days for the government to charge individual consumption taxes on golf clubs the same as with luxury businesses,” said Jim Hwang, the CEO of IMG Golf Course Management.

“But if the government lowers the individual consumption tax rate, this will also hit public golf courses, so we should think more carefully about this issue.”