Incoming tax changes that will affect your pocket

Incoming tax changes that will affect your pocket 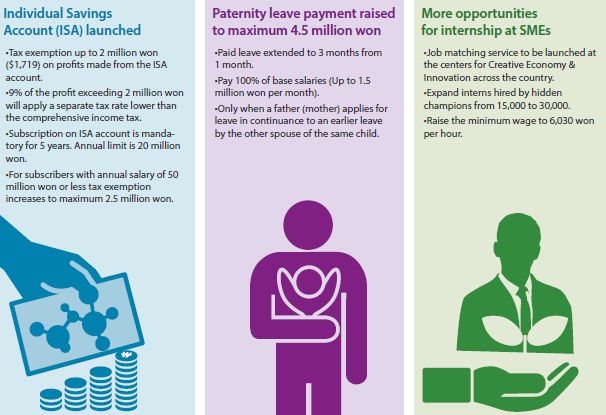 Including on-the-spot tax refunds for foreign tourists, a number of changes will be made in the country’s taxation, finance and employment systems next year, aimed at improving consumer sentiment and reviving the economy.

Controversial reforms on government pensions will also be enacted, a major step towards the Park Geun-hye government’s structural reforms.

Among the changes are: 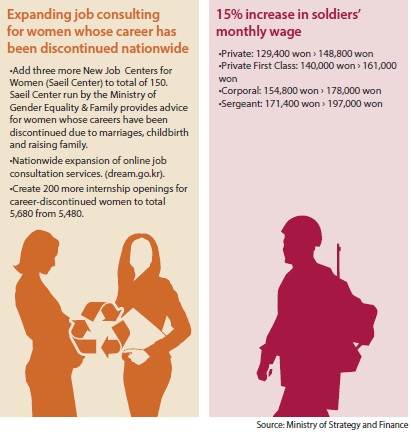 In March, the much-touted individual savings accounts (ISA) will launch, enabling taxpayers to manage their savings accounts, funds, equity-linked-securities (ELS) and other accounts in a single electronic platform. They can put up to 20 million won ($17,000) in their ISA per year and hold the account for five years. Every year, up to 2 million won from the total interest income will be tax exempt. Earned-income taxpayers, and also farmers and fishermen can subscribe to the account. The government has been promoting the program as a good way for the public to save taxes and make more interest on their income amid the prolonged low-interest rate policy.

Those who can be more aggressive with investments will likely turn to fund products that invest more than 60 percent in overseas listed stocks. These investors will be exempt from arbitrage transactions and dividend income taxes. A maximum of 30 million won can be invested in these funds for tax benefits until 2017.

When individuals personally use vehicles registered under company names, they must record their use in order to have the car-related taxes exempted, especially when the total annual cost exceeds 10 million won.

Tax benefits for those who take care of parents will increase. People who live with their parents, and have no house under their own name, will get 80 percent deductions in inheritance taxes when they acquire their parents’ house, up from the current 40 percent. When children get their parents’ other assets, up to 50 million won will be deducted from taxation.

Starting in January, foreign tourists can get tax refunds on the spot at all duty-free shops, when each purchase is less than 200,000 won and the total does not exceed 1 million won. From April, foreigners will be refunded with value-added taxes for plastic surgery ranging from eyelids, nose and breast implant work to liposuction, face-lifting and teeth work. The tax refunds will last until March 2017.

The Financial Supervisory Service will launch a service where consumers can compare all financial products on the authority’s homepage from January. Ranging from depositary accounts, mortgage programs and housing loans to pension savings made by a number of financial institutions, consumers will be able to compare and choose products that are best suited for them without having to access each separate financial institution’s website.

Around July at the earliest, the country’s first web-based banks will begin operations. Kakao Bank, led by Kakao, and K-Bank, led by KT, which won preliminary approval from the Financial Services Commission, will prepare their operations and apply for official approval. The web-based banks will not have brick-and-mortar branches. Smartphones will be the main transaction device for the banks. They plan to offer mid-range loans for consumers with low credit ratings.

Some mental illnesses that have clear symptoms and causes will be covered by medical insurance that pays for actual expenses from January. The covered diseases include mental and behavioral disorders caused by brain damage.

From June, mobile carriers must notify their subscribers if they exceed the maximum amount of voice calls and text messages in order to prevent them from paying too much on their phone bills. So far, the notification has been required only for data usage.

The government will ease regulations on the construction of business hotels from March. A hotel with more than 100 rooms, which have no unhealthy facilities for students, can be built in areas 75 meters (246 feet) away from schools. Currently, such hotels are not allowed to be established within 50 meters of schools. To build them 200 meters away, they need approval from the committee on environment for students under regional education offices.

To meet the rising demand for leisure and sports, camping areas and sports facilities can be built in forests that have been protected for environmental preservation.

To give more opportunities to women who have stopped working due to pregnancy and child care, the government will set up 150 centers across the country where women can find information regarding re-employment. Internship opportunities for women will be expanded from 5,480 to 5,680.

Internship opportunities for young Koreans will also be expanded. Korean “hidden champions,” referring to small but stable businesses, will hire 30,000 college graduates as interns next year.

Fathers will be able to apply for child care leave for up to three months and be subsidized 4.5 million won for the period. Currently, male workers can apply for one-month leave for raising children with 1.5 million won in subsidies.

The government will offer subsidies of up to 10.8 million won per employee for employers who adopt the government-promoted peak wage system next year. Employees who earn less than 72.5 million won will be subject to the subsidy. Under the system, older workers’ salaries plateau or decline by around 10 percent gradually as they approach the retirement age of 60, making way for younger hires.

The government’s official pension will be reformed next year. Government officials will pay 9 percent of their monthly wage as premiums for their pension, up from 7 percent this year. The percentage of monthly payouts given to the current group of civil servants when they retire will gradually reduce, from 1.9 percent to 1.7 percent of a worker’s average monthly income from next year. The minimum age when government officials can take the pension money will be gradually raised from 60 to 65.

From February, consumers will be able to cancel their traveling plans whenever they want. Currently, they have to pay penalties demanded by travel agencies. By law, cancellations will not require penalties from next year.

As well, foreigners who have no relations with Koreans but want to acquire Korean citizenship must have 60 million won or more in assets. The current requirement is 30 million won. Alternatively, they should have more than 29.68 million won in terms of gross national income per capita.