Lions’ Koo still has something to prove

Lions’ Koo still has something to prove 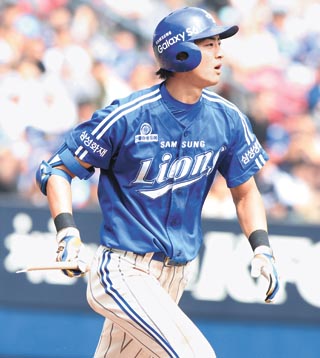 Last year, things only got better for the Samsung Lions’ Koo Ja-wook. The 22-year-old first gained attention for his handsome looks, but once the season started, he captivated fans with his performance.

After graduating from Daegu High School in 2012, Koo joined the Lions’ second division team. While completing his mandatory service on the Korean military’s baseball squad, known as Sangmu, he was named the 2014 batting champion for the second division Korea Baseball Organization (KBO) Futures League’s southern league. In his first year with the Lions’ top division team in 2015, Koo finished with a .349 batting average, 11 home runs, 57 RBIs and 97 scored runs in 116 games to win KBO Rookie of the Year.

Koo’s performance was pivotal for the Lions to win the regular season, as he filled the void of core players who were sidelined because of injuries. He played five defensive positions while also breaking the record for most consecutive hits by a KBO rookie.

The Lions, which lost to the Doosan Bears in the Korean Series last year, are hoping Koo steps up as the team’s core player, and Koo says that he still has lot more to show.

A. In 2014, I was the batting champion for the KBO Future League’s southern league and had my best season ever, but 2015 was even better. However, I still felt sad at the end [because of the loss in the Korean Series.]

Did you know you would perform well in 2015?

I was confident. Before going to spring training in 2015, I was diagnosed with stomach ulcer and lost about 5 kilograms (11 pounds). I thought at first that the 2015 season would be really tough for me, but I decided to accept the reality and just try my best.

You were named Rookie of the Year by five organizations, in addition to the KBO, in 2015. How did that feel?

I was happy I got awards that you can win only once in your lifetime. To participate in the award ceremonies, I had to stay in Seoul for more than a week and during that time, it felt like I rested for a month. My body was wanting me to train, but since I had to wake up early and sit for a long time in the awards ceremonies, it was really difficult. I felt again that baseball is the really easy thing for me to do (laugh).

Looking back, how have you gotten so far in your career?

Before becoming a senior in high school, I had little passion for baseball. I just thought I should go to college. Back then, I wanted to be a pitcher, but since I didn’t want to stress out my parents, I switched to batting. I was a leadoff hitter when I was in the second grade, but my batting average was just .140. I was disappointed.

You received fans’ attention even before making your KBO League debut because of your good looks. How did that feel?

It felt good. But still, I occasionally read people’s comment on my stories online. When I saw people posting negative comments like, ‘He will not succeed in the top division’ or, ‘Competing in the first-team roster is not easy,’ it made me decide I really needed to prove myself with my performances.

Did you feel pressure because of how handsome people say you are?

Obviously I feel pressure. Since I’m a baseball player, I don’t want to be evaluated solely on my face. Some people say I look lazy or cunning because of my appearance and that’s why I work as hard as I can.

A year ago at spring training, manager Ryu Joong-il said you are like a rookie solider who needs to be “taken care of.” What can you say about his comments?

Ryu asked me whether I’m the kind a player who trains hard, but I answered that I prefer to work at my own pace. Coach heard my answer and then told me I shouldn’t have answered like that, and the manager also said you should never work only moderately hard because in batting, a player who practices as hard as he can always wins. At that time, I was practicing on my own every couple of days, after that incident, I practiced everyday.

How did you adjust to the KBO League?

After I heard the manager’s advice, I made up my mind to do well, but I lost my concentration at one point during the season and thought I was done for. You know, you can’t be at your best for a whole season. By the end of May, I had gotten a little lazy. Coach Kim Han-soo had a private conversation with me and said I should not show that sloppy attitude because I’m young and still not a starter. I then re-focused my mind. I realized that once you let go the concentration, the result is miserable.

Are you stressed about the upcoming season?

I feel that I have to overcome the pressure of being the Rookie of the Year. There are still many outfielders in our team and since my position isn’t confirmed yet, I have to show more. I think my fate will be decided after spring training.

So, are you still worried about not being a starter?

Yes. I still don’t have my position. Last year, I played because of Chae Tae-in’s injury, but his physique is perfect. I played infielder positions last year and I really don’t want to lose my spot there, although I’m more comfortable in the outfield.

What kind of hitter are you ultimately looking to be?

I don’t think I’m a home-run hitting slugger, although I want to be. Although, winning a home run title isn’t my goal, I want to be a player who can consistently deliver 20-30 home runs per season. Last year, for the first time in my career, I got a two-digit number of home runs. It’s my own greed, but I will be satisfied if I can hit 20 to 30 home runs.

What do you need to improve if you want to be a home-run hitter?

My weight is around 80 kilograms at this moment, but I want to bulk up to 90 kilograms. I eat a lot, but I strangely don’t gain weight. It’s stressful for me. I also need to strengthen my stamina, too. In order to become like Lee Seung-yeop, I also need to develop my mental strength. Lee is a very exemplary player for us as he trains first in the field. As I look him, I realize age is just a number. He always tries to be better and that fascinates me.

Last year, my goal was to play as many as games I can. But because of injury, I had to skip 28 games and played only 116. So, my goal for this season is to play full-time and that will allow me to have better stats. Personally, I’m thinking of a .350 batting average, but I will not bothered by it.