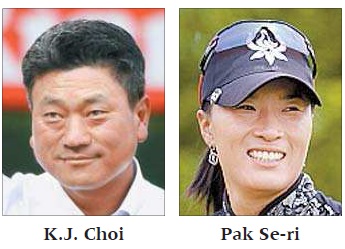 For the first time in 112 years, golf will be played at the Olympics, and fans are already speculating about which golfers will represent Korea in the upcoming games in Rio de Janeiro.

But behind every great player is a great coach, and curiosity is also building over who will lead Korea in golf.

According to Oh Chul-kyu, secretary general of the Korea Golf Association (KGA), the sport’s national governing body has already set guidelines for selecting an Olympic coach.

“At the Olympics, we will see world-class golfers represent Korea,” Oh told the JoongAng Ilbo. “A world-class golfer who can guide these players and has experience playing in overseas tours will be the ideal candidate for coach.”

Although the KGA will still have to go through the process and rules set by the Korea Olympic Committee, it is leaning toward selecting one coach each for the men’s and women’s team. The KGA said that after a general meeting on Jan. 25, its competitiveness committee will discuss coach selection and finalize the process next month.

Oh added that golfers in their late 30s or 40s have a high chance of being considered for the position.

Among the names, Choi and Pak getting the most buzz among fans. Both have not officially revealed that they want the job, but they have hinted at the possibility.

Choi, 45, has experience leading a group of golfers. At last year’s Presidents Cup in Incheon, he was vice captain of the International team.

“Since my childhood, I have envied athletes who wear national team uniforms,” Choi said in a previous media interview. “I want to contribute to the national team in some way.”

Pak, 38, who has won 25 LPGA Tour events, recently said that golf’s re-entry into the Olympics has drawn her attention. Like Choi, she has had leadership experience on the green. In 2007 and 2008, she was Asia team captain at the Lexus Cup, where Asian golfers compete against an international team representing the rest of the world.

“Golf is an individual sport, so it is difficult to play as a team,” she said. “In the past year, I felt many things while being a captain at the Lexus Cup, and I really enjoyed it.”

Even if the coaches are appointed next month, their roles will be limited. The golfers who will compete at the Olympics will not be determined until mid-July, when they are selected based on their world rankings.

“Coaches can’t train with golfers separately because they don’t know who will be on the squad until mid-July,” an official from the KGA said. “Coaches can probably work on analyzing golf courses, but other than that, there is not much they can do before the squad is finalized.”

Since golf is an individual sport, the influence of a coach is already relatively small compared to other sports.

On top of that, team events will not be part of golf at the Rio Olympics, and tightly packed tour schedules before the Olympics means players may not have enough time to take personal lessons from the coaches.

KGA officials are already reviewing the golf course being built in the Reserva de Marapendi in the Barra da Tijuca area. They said adjusting to the wind conditions may pose a challenge, but it will not be an unfamiliar course for top Korean golfers who have experience with various greens around the world.

While top Korean golfers, including world No. 2 Park In-bee, have said that their major goal this year is to win gold, the KGA has been offering bonuses to boost player’s motivation to compete in the Summer Games.