Korea pushes on in Olympic qualifiers

Korea pushes on in Olympic qualifiers 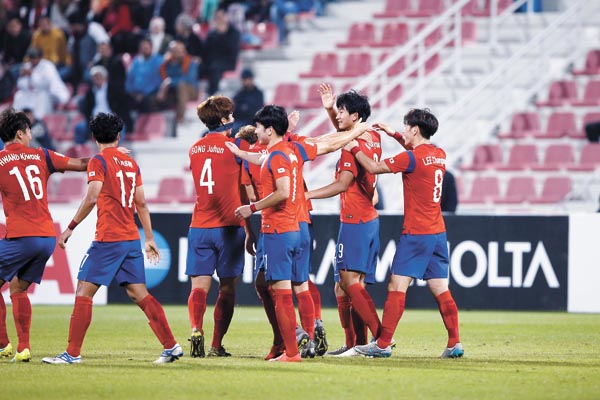 Korea’s Under-23 football team celebrates after forward Kim Hyun, second from right, scored the opening goal against Iraq at the Olympic qualifying tournament in Doha, Qatar on Wednesday (Korean time). The match ended with a 1-1 draw, but Korea won the group over Iraq. Both will advance to the quarterfinals. [KOREA FOOTBALL ASSOCIATION]

The coach of Korea’s Under-23 football team Shin Tae-yong said his boys will show their true abilities in the knockout stage, as the team advanced to the quarterfinals of the Asian Olympic football qualifying tournament on Wednesday (Korean time) as the group winner over Iraq.

At the Grand Hamad Stadium in Doha, Qatar, Korea had a 1-1 draw against Iraq, but finished first in Group C of the Asian Football Confederation (AFC) U-23 Championship.

The 16-nation tournament serves as the final round regional qualifier for the 2016 Summer Olympic Games in Rio de Janeiro.

The top three countries will earn their ticket to Brazil.

Both Korea and Iraq had already booked their slots for the quarterfinals before meeting each other as they had previously beaten Uzbekistan and Yemen. The result on Wednesday meant the two countries are tied at seven points on two victories and a draw, but Korea won the group thanks to its goal differential.

As the winner of Group C, Korea is scheduled to face the runner-up in Group D on Saturday, but its opponent has yet to be determined. Jordan, the United Arab Emirates (UAE) and Australia all are competing to book their slot to the quarterfinals, while Thailand has already been eliminated.

The results of their final matches, in which Jordan faces Australia and the UAE meets Thailand, will come out early Thursday morning Korean time.

Shin has previously said he wants to avoid meeting Australia, but at the moment, the 45-year-old says Korea’s opponent doesn’t matter.

“It’s not important which team we’d prefer to meet,” Shin was quoted as saying by the Korea Football Association. “At the knockout stage, we should prepare for every match as though it’s the final. We can’t afford to feel relieved, as our coaching staff and players need to focus and prepare well.”

Shin, who coached the Seongnam Ilhwa Chunma to their AFC Champions League win in 2010, said the team really needs to show what it’s capable of in the knockout stage. He added that the team will decide its starting members and formation once its opponent is decided. Korea, which is looking for its eighth consecutive appearance in the Summer Games, has been using different formations in all three of its Group C matches.

In order to rest core players and gear up conditions for backup members, Korea started seven new players against Iraq compared to its previous match against Yemen. The Under-23 team also came up with 4-2-3-1 formation, which was different from previous matches, where Korea used 4-3-3 and 4-4-2 formations.

The strategies paid off in the 22nd minute when Kim, who is the tallest forward in the squad at 1.9 meters (6-foot-3), headed a cross from Lee Chang-min and found the net over Iraq goalkeeper Karrar Ibrahim. It was the 22-year-old Jeju United forward’s first goal for the U-23 team since last March against Brunei.

After finishing 1-0 at halftime, Korea inserted Moon Chang-jin, who scored two goals in the first match against Uzbekistan, and Kwon Chang-hoon, who had a hat trick against Yemen, in the 68th minute to spur the attack, but the extra goal never came.

Instead, Korea allowed an equalizer by Iraq in stoppage time after Mohannad Abdul-Raheem centered from the right to Amjed Hussein, who slid in to score past Korean goalkeeper Kim Dong-jun.

“It’s sad that we gave up an equalizer at the end, but the players who have been previously benched really did well in the first half,” Shin said. “Although we had a tough time in the second half, I’m happy we reached the quarterfinals as the group winner.”

However, Shin did say that players should have learned that there are still many things to improve. The former attacking midfielder especially didn’t like that the team started to lose concentration during the match, and told players that it should never happen again during the quarter finals.

“I told them when we are winning the game, we should not play from the back,” Shin said. “We won’t repeat same mistakes.”

But one hopeful sign for Shin, who is also an assistant to senior men’s team coach Uli Stielike, was the performance of striker Kim. Although 19-year-old striker Hwang Hee-chan is likely to start in quarterfinals, Shin said he will give more playing time to Kim.

“His [Kim’s] movement was good and he scored a goal,” Shin said. “Although there were disappointing moments, I think Kim has earned more confidence with a goal.”