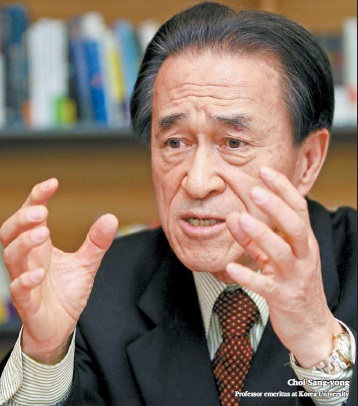 Seoul and Tokyo reached an agreement at the end of December that effectively resolved the long-time dispute over the Imperial Japanese Army’s sexual enslavement of Korean women during World War II.

But the deal, which called for an official apology from the Japanese government as well as a multimillion-dollar state-backed fund for the victims - euphemistically known as “comfort women” - has since been met with mixed reviews.

But it has also raised other issues: Japan has called for the bronze statue of a Korean girl - which symbolizes the victims - to be removed from across the Japanese Embassy in Seoul; and concerns have also arisen over the nature of Japan’s apology, which was not delivered through Prime Minister Shinzo Abe, but rather the Japanese foreign minister.

This has called into question the sincerity of the apology, prompting public criticism, while the sentiment regarding the deal in Korea has been especially negative.

Choi Sang-yong, a professor emeritus at Korea University and the former ambassador to Japan, weighed in on the issue recently in an interview with the JoongAng Ilbo earlier this month and shared his outlook on prospects for bilateral relations.

Q. How do you view the backlash to the comfort women deal?

A. This agreement resulted from the resolve of President Park Geun-hye and Prime Minister Shinzo Abe as well as upon the recommendation of the United States. It is the result of efforts to stop a worst-case scenario in relations between Korea and Japan.

However, in the process of the agreement, there were two crucial missteps. First, there was no meaningful dialogue with the victims themselves. That is an error of omission.

Second, the expectation that this was to be a “final and irreversible” resolution is unrealistic and premature. There has never been a case between Korea and Japan where negotiations on an issue have been irreversible.

Didn’t Japan’s attitude toward the issue after the deal fuel the negative public sentiment in Korea?

The government’s responsibility in the explanation has to be questioned. Our president is a female president. President Park should have held the hands of the some 40 surviving comfort women victims and explained to them, “I, as the president, tried my best. However, there are many difficulties in diplomatic relations.”

I don’t know why such an opportunity was missed. Politics is a combination of timing and wording. The word “irreversible” means that it will be difficult to mention [the comfort women issue] in future summits.

Do you mean that the comfort women issue could continue in the future?

Japan has made thoughtless remarks or acted inappropriately in the past, and it is still happening now and will continue to happen in the future. If we explain [our side] logically in a way that can be understood, many Japanese would accept it. We have to believe in that fact.

On the day the comfort women deal was sealed, the wife of Prime Minister Abe visited the Yasukuni Shrine, which led to concerns over the sincerity of the deal.

The issue of visiting the Yasukuni Shrine is a little different from the other issues regarding Dokdo [the islets in the East Sea that Japan claims and subsequently calls Takeshima] and revisionist history textbooks. Within Japan, there are already various solutions: First, to build another facility to pay respects; second, to remove the 14 Class-A war criminals located there; or third, to continue to pay respects there but to restrict the prime minister from doing so.

Prime Minister Abe is someone who wants to pay his respects [at Yasukuni] more than anyone else. However, he is refraining from doing so. Japan is taking the third solution.

There are many issues between Korea and Japan. Aren’t the issues surrounding Japan’s revisionist textbooks progressing?

Of course it isn’t over yet. There are three main reasons why it’s difficult to resolve the two countries’ history problem: the Dokdo islets, textbooks and the Yasukuni Shrine. To begin with the conclusion, there is no silver bullet to satisfy everyone in both countries. There were many people who called the time that I served as the Korean ambassador to Japan during the Kim Dae-jung administration as the “Korea-Japan honeymoon period.” The lesson learned then was that if [Japan] is persuaded by truth and logic, a certain level of agreement can be reached.

How would you resolve the Dokdo issue?

There is no model answer. The answer is to maintain the current situation peacefully. Maintaining the status quo may not be appealing, however, the current situation includes Korea’s effective control [over the islets], and territory disputes are more favorable to the side that holds effective control. We have to maintain this peacefully. This means there is no need to use excessive force or be provocative.

During your time as ambassador to Japan, then-President Kim Dae-jung and then-Japanese Prime Minister Keizo Obuchi issued the Joint Declaration on a New Korea-Japan Partnership for the 21st Century. What is the background for this declaration?

I participated in that joint declaration. Japan evaluated it as the best model to deal with the history issue. However, there has not been such appraisal in Korea. It seems like it is an agreement from the Kim Dae-jung administration so it is being avoided; but the result is that we cannot take advantage of a deal that we made. Former Prime Minister Tomiichi Murayama’s statement [in 1995] was made unilaterally by Japan on its postwar issues. However, the Kim-Obuchi joint declaration, [which states that the Japanese prime minister “humbly accepted the historic fact that Japanese colonial rule inflicted unbearable suffering and pain on the Korean people and expressed painfully deep repentance and heartfelt apology for the ordeal,”] was negotiated between a Liberal Democratic Japanese Party prime minister and the Korean president. If we preserve that, there should be no problem.

Korea and Japan normalized diplomatic relations through a bilateral treaty in 1965. How do you view then-President Park Chung Hee’s decision at the time?

There was a lot of movement opposing the Korea-Japan treaty. Politicians at times seize power through the political process and at times undergo trial and error and ups and downs, and at times, are evaluated in the larger picture through their work. A big politician is one that can partake in fierce debate for and against. Syngman Rhee, who founded a country; Park Chung Hee, who enabled industrialization; and Kim Dae-jung, who achieved democratization, are big politicians.

You published a new memoir that deals with the “oral history record.” What is the significance of oral history?

Autobiographies usually are criticized for being a justification for oneself. That’s why oral histories, where experts ask questions and the respondent answers based on truth and memory are viewed as highly objective sources.