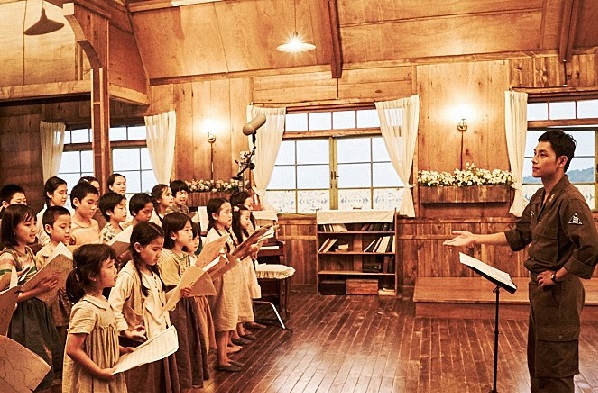 After a close competition at the weekend box office, “The Revenant” outperformed its new competitor, “A Melody to Remember,” by a thin margin, holding on to first place with only 1,650 more tickets sold.

However, because of the unprecedented cold wave that has engulfed the Korean Peninsula since last Wednesday, leading the weather agency to issue cold spell alerts for most parts of the country, including Seoul, local theaters saw the smallest audiences since the winter began.

According to the local Yonhap News Agency, the number of moviegoers on the fourth weekend of January decreased by 42.4 percent compared to last year, from 2.7 million to 1.6 million, the lowest in five years.

Directed by acclaimed filmmaker Lee Han, the film centers on the human side of the Korean War (1950-53) and a bereaved soldier named Han Sang-ryeol (Yim) who tries to restore hope by creating a children’s choir.

“The Big Short,” a behind-the-scenes look at the U.S. financial crisis with an all-star cast including Brad Pitt and Christian Bale, debuted in fourth place with 143,097 tickets sold.

Another biographical film, “Steve Jobs” starring Michael Fassbender, got off to a moderate start in 10th place, with 32,672 tickets sold.

2. A Melody to Remember