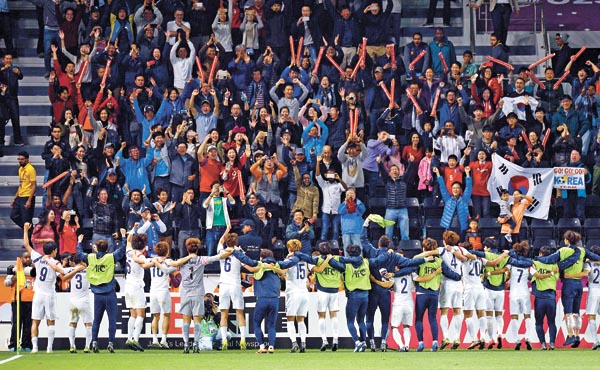 Korea’s Under-23 men’s football team celebrates with fans at the Jassim Bin Hamad Stadium in Doha on Wednesday (Korean time) after beating Qatar 3-1 in their Asian Olympic football qualifying tournament semifinals and securing their spot at the Summer Games in Rio de Janeiro. Korea will now play football in the Olympics for a record eighth consecutive time. [NEWSIS]

Korea is heading to the Summer Olympics in Rio de Janeiro.

At the Jassim Bin Hamad Stadium in Doha on Wednesday (Korean time), Korea clinched its spot by defeating host Qatar 3-1 in the semifinals of the Asian Football Confederation (AFC) U-23 Championship, which also serves as the regional qualifier for the Summer Games.

In this 16-nation tournament, the top three teams earn a ticket to Brazil, meaning the two finalists automatically go to the Summer Games in August, while the semifinal losers fight it out for the last spot.

Korea will meet archrival Japan in the final scheduled Saturday. Qatar and Iraq will have a do-or-die third place match.

The victory over Qatar also made Korea the first country in the world to play men’s football in the Summer Games eight consecutive times. Korea had previously been tied with Italy, which qualified for seven Olympics in a row on two separate occasions, most recently from 1984 to 2008.

In addition, Korea also kept its unbeaten streak in the final round of the Olympic qualifiers. Since 1992, the Taegeuk Warriors haven’t lost their last 34 matches, collecting 25 wins and nine draws.

“As Korean media has kept talking about a record eighth consecutive appearance, I felt pressure,” said coach Shin Tae-young. “But getting rid of those thoughts led to this good result. Now, it’s time for us to grow our skills, which will determine which medal we deserve in Rio de Janeiro.”

For the decisive semifinals match, coach Shin decided on a 3-4-3 formation, which the team had yet to use in the tournament.

With 19-year-old forward Hwang Hee-chan benched with an ankle injury from the quarterfinals against Jordan, Jeju United striker Kim Hyun filled in. Bayer Leverkusen’s Ryu Seung-woo and Suwon Samsung Bluewings’ Kwon Chang-hoon - who had a hat trick against Yemen earlier in the tournament - supported Kim from the flanks.

Goalkeeper Kim Dong-jun, who missed the quarterfinals due to a head cold, returned to the net.

Korea was wise to use 1.9-meter forward Kim in its attack, as he headed the ball to his teammates in open space and held off Qatari defenders. No goals were scored in the first half, but just three minutes into the second, Ryu broke the deadlock. Defender Hwang Ki-wook delivered a pass to Ryu, who had penetrated Qatar’s defensive line, and as goalkeeper Muhannad Naim left the box to clear the ball, the 22-year-old midfielder touched the ball into the empty net.

Both teams went on to exchange shots, but neither scored again. In the 60th minute, Korea put midfielder Moon Chang-jin, who had three goals coming to the match, to boost attack, but it was Qatar that managed the equalizer in the 79th minute.

While midfielder Ryu was temporarily out of the pitch to receive medical treatment, Ahmed Alaa fired a volley from Musaab Khidir’s cross that slipped past goalkeeper Kim Dong-jun, even though he had managed to put hands on it.

But Korea didn’t give up. With one minute left to regulation, right back Lee Seul-chan delivered a cross to Kwon Chang-hoon who tapped it in for the winner. It was Kwon’s fourth goal of the tournament.

In the five minutes of extra time, Korea confirmed its road to Rio. Hwang Hee-chan, who entered the match in the 70th minute, dribbled passed three defenders and set up for Moon, who strike with his left foot to get Korea’s third goal.

“I wanted to win, so I told our boys to play simple and easy football,” Shin said when asked about his tactics.

The 45-year-old coach especially liked the performance of the two second half substitutes, Hwang and Moon.

“I told them to be heroes for this match and notified them they’d be entering the game for about 30 minutes in the second half,” Shin said. “I reminded them to make something happen, and they really did well.”

Although the Olympic ticket has now been booked, Shin said the team will still put its full effort into defeating Japan in the championship.

“I wanted Japan to be in the final,” he said. “Although the Olympic ticket is important, we are here to win the championship.