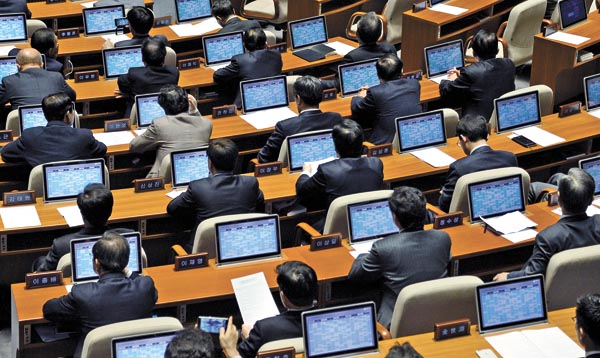 Lawmakers cast their ballots on pending bills in a plenary session at the National Assembly on Thursday. [NEWSIS]

The National Assembly on Thursday passed long-stalled economic legislation intended to encourage corporate restructuring to enhance competitiveness, ending a seven-month standoff over a bill pushed by the administration and ruling party.

National Assembly Speaker Chung Ui-hwa opened a plenary session at 2:35 p.m. to vote on a series of pending bills, and lawmakers from the three key parties attended.

One of the bills was the so-called One-Shot Act proposed by Rep. Lee Hyun-jae of the ruling Saenuri Party based on a government proposal. Among the 223 lawmakers who participated in the vote, 174 supported it, 24 voted against and 25 abstained.

While the ruling Saenuri Party and centrist opposition People’s Party supported the bill, 21 lawmakers from the Minjoo Party of Korea and three Justice Party representatives voted against it.

Its passage came 212 days after the bill was submitted to the National Assembly. The law will take effect in August.

The law is intended to streamline the process when companies make investments and restructure their business. It is designed to reduce legal procedures for corporate restructuring required by existing laws, and provides tax cuts for businesses that are voluntarily sold off or purchased. It also eases procedures for mergers and acquisitions in industry sectors in crisis.

Addressing concerns that the law will offer loopholes to families who control conglomerates to transfer wealth from one generation to the next, the law said a restructuring plan won’t be granted if the purpose is deemed to be transfer of ownership. Even after restructuring, benefits will be taken away and fines will be imposed if that intent was later proven.

The special law’s mandate was also reduced from five to three years.

The business community welcomed its passage.

“It is promising that the ruling and opposition parties passed the bill to overcome the economic crisis,” said Chu Kwang-ho, head of the economic policy division at the Federation of Korean Industries, the country’s largest business lobbying group. “We have high expectations that the special law will strengthen industrial competitiveness and revitalize the economy.”

Thursday’s plenary session was the last voting session of the January extraordinary session. In addition to the One-Shot Act, 39 other bills were passed. Although the floor leaders of the Saenuri and Minjoo parties agreed on Jan. 23 that they would pass the One-Shot Act and a North Korea human rights bill on Jan. 29, the Minjoo Party broke the agreement, citing the opposition of its interim leader Kim Chong-in. At the time, Kim said the economic bill was not urgent and more negotiations were needed.

Public criticism of the broken promise snowballed, and the People’s Party of Ahn Cheol-soo said it would support the One-Shot Act if a vote was held. The Minjoo Party then allowed the bill to advance to the plenary session.

The North Korea human rights bill, however, was not voted on.

After the session, the chairmen and floor leaders of the Saenuri and Minjoo parties sat down to negotiate other pending issues, including a new electoral constituency map for the April 13 general election, but no agreement was made.