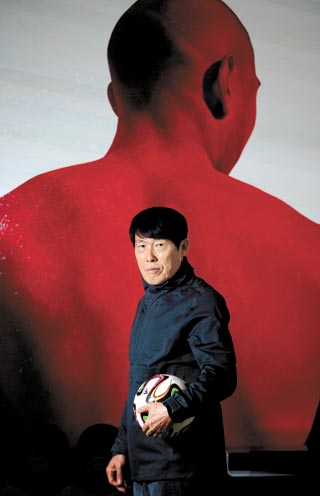 Cha Bum-kun sits in front of a portrait of his son, Cha Du-ri, at his home in Seoul last month. Cha has run the youth football clinic FC Chaboom and handed out football awards to elementary school-age players since 1988. [JUN MIN-KYU]

In Qatar, Korean football fans saw forward Hwang Hee-chan and midfielder Moon Chang-jin as pivotal in leading their team to the Summer Olympic Games an eighth consecutive time. In Spain, forward Lee Seung-woo and Paik Seung-ho are working their way toward entering the first-team squad of FC Barcelona.

All these prospective football players have one thing in common: They all received trophies in the Cha Bum-kun Football Awards when they were sixth-grade elementary students.

Founded in 1988, the award, named after Korean football legend Cha Bum-kun, is only given to elementary school-age football standouts. Last year, Seo Jae-min of Sinjeong Elementary School in Seoul was named the top prize winner.

For Cha, 62, raising the profile of young players has been a lifelong dream. He also runs a youth football clinic, FC Chaboom.

When it comes to selecting winners for the award, the former Frankfurt and Bayer Leverkusen forward said pure skill wasn’t the only criteria the evaluating judges considered.

“Among the young players who perform well, we particularly focus on the ones who have the potential to develop further,” Cha said in an interview with JoongAng Ilbo at his home in Seoul. “If the candidates all have the same skills, we look at their personalities. We look at their student record, and check them out on the field before having a discussion.”

Cha, who scored 98 goals in 308 matches in German Bundesliga, said that he first thought about opening youth football clinics in 1976, when he visited Japan.

“When I was in Japan in 1976 for the [Japan Soccer League Cup], I saw 20 to 30 Japanese children playing football and realized Korea was about 10 or 20 years behind,” he said.

Cha added that the interview he gave just before signing with German Bundesliga still sticks in his mind. The two-time UEFA Cup winner told the press at the time that he would learn all he could about football in Germany to one day return to Korea to nurture young talent.

“The reason why I played 10 seasons was in preparation for funding a youth football clinic,” he said. “As I was about to return, I had an internal conflict because I had gotten so comfortable with life in Germany while I was a star there. But I had to come back.”

Cha kept his promise. After returning to Korea, the first thing he did was to open a youth football clinic. The former Ulsan Hyundai and Suwon Samsung Bluewings coach said that helping young children learn the basics is one of the ways Korean football can progress further in the future.

“I heard that when boys start to play football before age 8, they develop a sense of how to control the ball,” he said. “It’s difficult to understand that kind of control when you’re an adult, even if you train a lot.”

When asked about young players who have caught his eye recently, Cha mentioned 20-year-old forward Seo Myeong-won, who received the top Cha Bum-kun Award in 2007.

“There was talk that he could be the next ‘Cha Boom,’” said Cha. “I heard later that he had problems in school and injuries, and I was surprised him to see him playing for Daejeon Citizen in the K-League. Since he joined Ulsan, he’s gotten better; I have some expectations for him.”

Salzburg striker Hwang Hee-chan has also proven to be a standout. Though the 19-year-old didn’t score many goals in the Asian Football Confederation (AFC) U-23 Championship, his powerful dribbling and speed caught Cha’s attention.

But seeking out prospects isn’t always optimistic. When asked about why promising young players often left the country to play, Cha turned serious.

“It’s natural for players to move to play in a better environment,” he said. “But for the K-League, it can’t be good. The problem is that people say that the league is in danger, but I can’t see what’s being done to solve the problem. Even the K-League commissioner isn’t attending matches…”

The Korea Football Association, which governs the country’s clubs and its registered players, and the Korea Soccer Association of Sport for All, which manages amateur groups, are set to merge. Cha was tapped by his supporters to lead the newly combined football body, though he refused, citing that he didn’t want to be involved in the politics behind the sport.

“I’m a guy who likes to be with young players,” he said. “Older people are looking to the textbooks for history. I respect some of them, but at the same time, I don’t want to follow in their footsteps. I’m just thankful that I can help out kids.”

Cha is father of three children and his first son, Cha Du-ri, played football before retiring last year. The 35-year-old, who played with clubs including Frankfurt, Celtic and FC Seoul, is currently in Germany earning his coaching license.

As the son of a legendary footballer, Du-ri acknowledged that playing in his father’s shadow was always difficult. Some critics have claimed the younger Cha was born with a golden spoon in his mouth ? cynical Korean slang used to refer to someone who was born into a wealthy household and reaped the benefits.

But that life depends on how a person lives afterward, said the elder Cha, who grew up the son of a poor farmer. In that respect, he added, he’s proud of his son. “My wife told Du-ri many times that … he needed to work hard and always be thankful for what he had,” Cha said. “People who are born into the best environments often don’t notice how other people live, but I appreciate that Du-ri is not like those people.”