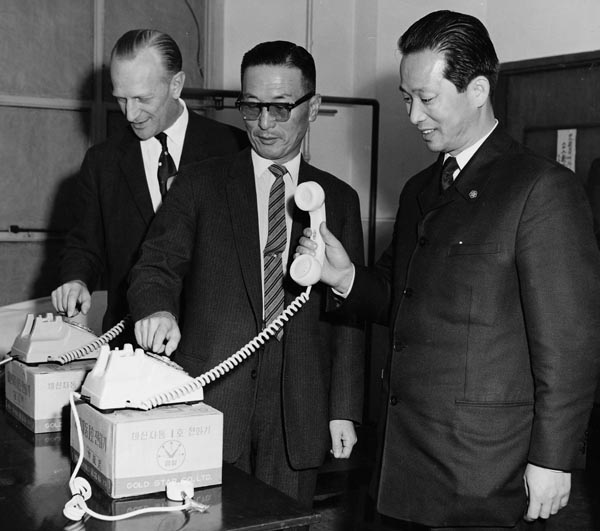 LG Group founder Koo In-hwoi, center, tests out the country’s first automatic telephone in 1961. LG Electronics, then known as Goldstar, was founded by Koo “Yonam” In-hwoi and became one of the conglomerate’s flagship companies with its advanced radios, televisions and refrigerators. LG GROUP

“Yonam” Koo In-hwoi, the founder of LG Group, and his eldest son “Sangnam” Koo Ja-kyung are both business tycoons who helped create the foundation for Korea’s growth into one of the world’s leading industrial economies.

Koo In-hwoi’s nickname comes from Yeonji-dong in Busan, where LG Group was born. It is a portmanteau of the Korean words for a small Buddhist temple and pond, both of which stood in front of the location where LG Group was founded. The son’s nickname, Sangnam, came from the name of the bridge that was located in front of the house in which he was born.

Yonam was both a businessman and a patriot. He funded the independence movement during Japanese occupation by donating large sums of money to the provisional government in Shanghai, even though it put him at risk of getting his business seized by the Japanese.

But most of all, Yonam and his son Sangnam are known for their management philosophy that focuses on harmony between people. Such practices are evident in how the Koo family has successfully separated from their long-time partners and LG Group co-founders the Huh family, who now run their own conglomerate, GS Group. Additionally, the Koo family’s decision to hand down the family business to the eldest child has been considered the most desirable model for succession within the Korean business community. 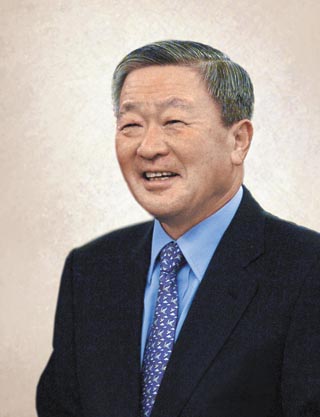 Today, LG Group’s current chairman, Koo Bon-moo, has been upholding the family’s traditional values. Koo created an award that commemorates people who have committed acts of virtue and valor and rewards them with incentives. Koo Bon-moo believes that it is the social responsibility of private companies to reward heroes who act unselfishly for their country.

Particularly under Sangnam, who served as the group’s second chairman, LG was able to transform from a conglomerate whose businesses were heavily dependent on the domestic market and workforce to one driven by exports, and in possession of advanced technologies.

LG Group founder Yonam was born in Jisu-myeon, Jinyang County, in South Gyeongsang on Aug. 27, 1907, and was his family’s eldest son. The Koo family were close neighbors with the Huh family, which began a lifelong relationship.

Yonam was brought up under a very strict, traditional family environment. All four generations of the Koo family, from Yonam’s grandfather down, lived under the same roof. Through this, he learned the importance of living well with others, which eventually led to the development of his management philosophy stressing harmony between all people, including customers, business partners and employees.

In 1920, Yonam married his neighbor’s daughter, Huh Eul-soo. One year later, he began attending the newly opened Jisu Primary School at the suggestion of his brother-in-law. Until then, Yonam had been receiving his education from grandfather Koo Yeon-ho, who worked at the office of the royal palace’s special advisers, as the Hongmoongwan.

The school, which would also educate Yonam’s five younger brothers, as well as his son Sangnam, is today an elementary school. The building features two commemorative items. One is a stone erected to honor Yonam. The other is an 80-year-old pine tree, donated by the first graduates of the school, including the LG Group founder himself.

While a student at Jisu, Yonam once led a group of students to boycott classes in protest of discrimination being perpetrated by the school’s Japanese principal. He even started an organization to offer free classes to young people in his neighborhood.

In 1924, Yonam began attending high school at Chung Ang High School in Seoul. He was exposed to new cultures and ways of thinking, which led to the idea of starting his own business.

He returned to his hometown in 1926, and quickly went on to head the village’s business cooperative union while also trading miscellaneous goods.

The following year, he became head of the Dong-A Ilbo newspaper’s branch office in Jisu.

In 1931, he opened a store along with younger brother Koo Chul-hwoi in Jinju, South Gyeongsang. Things didn’t go as planned, and Yonam suffered huge losses. But instead of moping over that first defeat, Yonam tried again by getting loans while putting up the family’s property as collateral. His fortune began to build on the backs of these trials and errors.

But it wasn’t only business that interested Yongnam. As his businesses gradually expanded, in 1941 he made a sizeable contribution to the Korean provisional government in Shanghai through an independence fighter who visited him dressed as a woman. He didn’t hesitate, despite the risk, because his father had done the same a decade earlier, when he donated to the famous Korean independence fighter Kim Koo.

When Korea regained its independence, Yonam started to focus on expanding his businesses by relocating to Busan and beginning to import charcoal. His company became the first in the country to receive trade approval from the U.S. Army Ministry Government in Korea.

It was around this time that a relative of his wife, Huh Man-jung, visited Yonam with his eldest son Huh Joon-gu, who had just returned from studying in Japan. The elder Huh asked if he could invest in Yonam’s business in exchange for Yonam showing his son the ropes of the business world. This was the beginning of the business partnership between the two families that lasted for decades.

Not long after, Yonam decided to accept his younger brother Koo Jung-hwoi’s advice and started a cosmetics manufacturing business. This was the moment that today’s LG Group was born. The group’s first truly successful business, Lak Hui Chemical Industrial Corporation, opened in 1947. It began selling a new face cream called Lucky, which quickly sold out despite its relatively high price thanks to its high-quality ingredients.

But though sales were soaring, because of a big problem with the cream’s lid, many people were returning the product.

Yonam’s solution was to use plastic for the lid, even though the material wasn’t common in Korea. In September 1952, Yonam opened a plastics plant in Busan and started manufacturing plastic hairbrushes, which also became a huge hit. Within two months, Yonam had to add additional manufacturing machines to meet explosive demand, and also started making new products like toothbrushes and washbowls.

But Yonam’s ambitions didn’t stop there. In 1958, he started Goldstar, which later became LG Electronics. Goldstar immediately began developing a radio, and in 1959, Korea’s first homemade radio started rolling off the production line. When KBS launched public broadcasting in December 1961, the company switched its focus to televisions, and created the country’s first black-and-white television by 1966.

Yonam passed away on Dec. 31, 1969, just before the start of the new decade. The day after his funeral, executives gathered at Goldstar’s conference room. It was at first unclear who would take the helm of the company. But the second-oldest brother in the Koo family, 61-year-old Koo Chul-hwoi, called out to his nephew and the eldest son of Yonam, “Ja-kyung, take your seat at the chairman’s desk and make your inaugural greetings.”

At that moment, 45-year-old Sangnam became the second chairman of Lucky Goldstar Group.

Sangnam had been trained by his father since an early age and had been working at his father’s company in management since 1950. Sangnam was soon known as an evangelist of innovation within LG Group, and focused on both stability and growth during the quarter century he served as chairman.

Before his father called him to join his business, Sangnam had been working as a schoolteacher. One of his students, former National Assembly Deputy Speaker Shin Sang-woo, remembered Sangnam as a teacher who held true to his principles.

After joining his father, Sangnam spent 18 years at the Busan plant while going between Lak Hui Chemical Industrial Corporation and Goldstar. In his first three years on the job, he ate and slept at the plant, and was at times mistaken for a laborer because he was often covered with dust and oil. Still, he finished what his father had asked of him.

Every year, the conglomerate holds what it calls a “consensus meeting,” where the CEOs of each affiliate and the chairman gather to design a business plan for the new year. In such an environment, the chairman loses his dominance, and power is shared more equally.

Sangnam also made contributions to the development of the Korean economy. He took the position as head of the country’s biggest business representative group, the Federation of Korean Industries (FKI), between 1987 and 1989, a time of heightened conflict between management and labor unions. He believed it was the role of the second generation of business leaders to maintain the honor of their forefathers and to keep alive the work they had done to expand the nation’s economy. As a result, he worked hard to influence the public’s perception of big corporations.

After spending 25 years at the helm of LG Group, Sangnam stepped down alongside other longtime executives in February 1995.

Only then did he join the family business where, like his father, he performed every low-level job assigned to him.

He was known for his tenacity but also for his humble attitude. Colleagues who have worked with him remember Koo Bon-moo as an easygoing guy who wouldn’t hesitate to have a few shots of soju with his colleagues after work. He was also known for making jokes.

Today, Chairman Koo Bon-moo has been concentrating on the LG Science Park, which has been under construction in Magok-dong in southwestern Seoul since late 2014. The area will house R&D facilities to secure future growth engines for the group, and Koo visited in December to ensure the development process is running smoothly.

Yonam had 10 children, while his son and successor Sangnam had six. Sangnam’s eldest son Koo Bon-moo, now in his 70s, has three children.

Sangnam’s third oldest child is Koo Bon-joon (64), vice chairman of LG Electronics, who has two younger sons of his own.

The fourth son Koo Bon-sik (57) is the vice chairman of Heesung Group.

Sangnam’s eldest daughter Koo Huan-mee (68) was married to the late CEO of Hee Sung Metal, Kim Hwa-choong, and the couple had two daughters. The youngest is married Lee Hae-wook, vice chairman and heir to Daelim Industrial.

Yonam’s second-oldest son Koo Ja-seung, who passed away, was married to the daughter of late FKI Chairman Hong Jae-seon.

Koo Ja-hak (84), third son and chairman of Ourhome, is married to the second-oldest daughter of Samsung founder Lee Byung-chull.

The fourth son, Koo Ja-doo (84), is the chairman of LB Investment.

The fifth son, Koo Ja-il (80), is the chairman of Ilyang Chemical.

1942: Sent funding to the Korean provisional government set up in Shanghai

Dec. 31, 1969: Passed away at his home in Wonseo-dong, Seoul. He was buried in Giheung-myeon, Yongin, Gyeonggi.

[Dynasty Korea’s corporate roots] For Hyundai founder, no challenge was too big