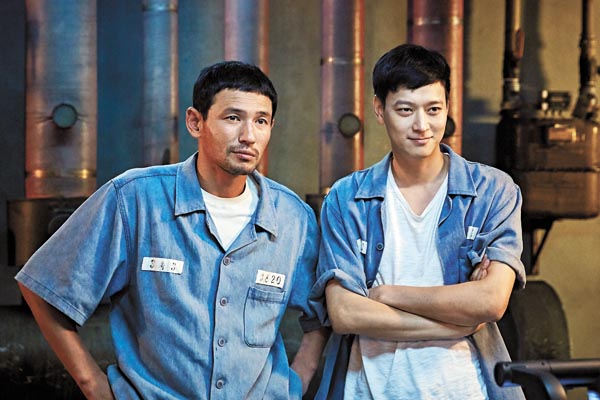 As the only Korean film to open in time for the holiday, the comedy flick starring two of Korea’s guaranteed crowd-pleasers - Hwang Jung-min and Gang Dong-won - was able to bring in 5.4 million theatergoers from Friday to Wednesday on nearly 1,800 screens nationwide.

There are a total of 2,489 screens in Korea, according to the state-run Korean Film Council.

Distributed by Showbox, a major film distributor and investor in Korea, “A Violent Prosecutor” accounted for an average of 72 percent of box office sales during the holiday period.

And the speed at which the film hit six million admissions - within eight days - was faster than any film released last year.

“A Violent Prosecutor,” directed by newbie filmmaker Lee Il-hyeong, follows the revenge plot of an aggressive prosecutor played by Hwang, who was imprisoned for the false charge of killing a prime suspect. He joins up with a pretty-faced con man played by Gang, who becomes his avatar after being released with his help.

“Kung Fu Panda 3,” another highly anticipated film at the crowded holiday box office, attracted 1.2 million moviegoers on less than 1,000 screens. Since it opened Jan. 28, the animated feature has sold 3.3 million tickets as of Wednesday.

The Oscar-nominated feature “Carol,” which opened Feb. 4, attracted a more-than-expected 94,154 theatergoers during the holiday on an average of 218 screens nationwide.