Beauty products and consumer electronics once dominated Korea’s exports to China, but food and snacks have now emerged as rising stars.

Orion Confectionery reaped record sales in the country last year, boosted by the growing popularity of its signature snacks from Korea.

The confectionery maker posted 1.3 trillion won ($1 billion) in sales, a 14.8 percent increase compared to 2014. Its operating profit was 200.4 billion won, up 23.3 percent year on year. The sales and profit figures are the highest since Orion moved into China in 1993.

“Orion was able to achieve over 10 percent sales growth every year in China due to great products and marketing strategy,” said a representative at Orion. 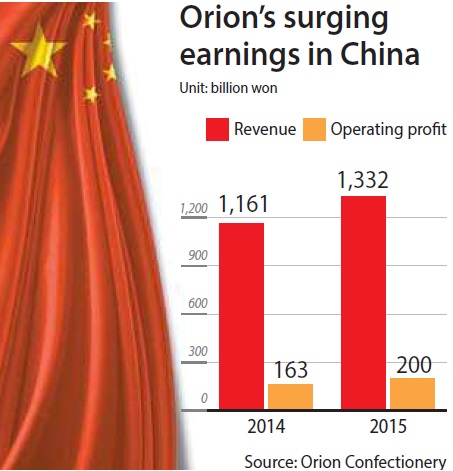 Orion said its popular snacks such as Choco Pie (sold as Hao Li You Pai in China), Goraebap (sold as Hao Duo Yu) and Xylitol chewing gum (or Mu Tang Chun) drove significant sales growth at a time when competitors suffered modest or negative growth amid a slowdown in China’s economy.

For marketing, Orion brought in popular K-pop and drama stars for its commercials, including actor Lee Min-ho and TV personalities Kim Jong-kook and Lee Gwang-soo.

The snack maker plans to introduce premium cracker lineups like Dr. You and Market O, which claim to use healthier ingredients.

Orion has expanded its presence in China from the 2000s by opening more production lines and distribution channels.

Orion’s sales network is spread over 2,000 mainland cities. It runs six factories in major cities such as Beijing, Shanghai and Guangzhou, as well as Shenyang in northern Liaoning Province.

Other Korean confectionery manufacturers such as CJ CheilJedang, Pulmuone and Lotte Confectionery also have production sites in China, but they have not had the same level of success as Orion.

“We have constantly invested on production sites to boost sales and presence in China,” the representative said, “and we are focused on promoting products in a localized manner.”

Orion surpassed PepsiCo in terms of sales in China in 2011 to become the second-biggest foreign player. The market’s No. 1 foreign player is U.S. chewing-gum company Wrigley.

The top food maker recorded $210 million in sales last year, up 17 percent compared to last year thanks to surging demand for its ramyeon noodle products. Nongshim will expand its production facilities in Shanghai to keep pace with growing demand.