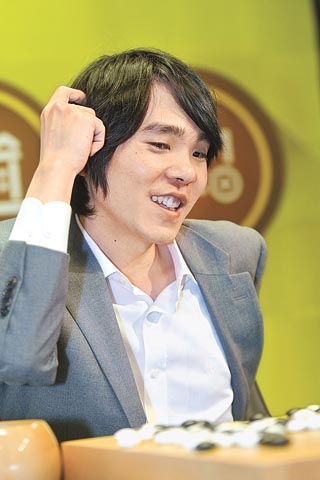 Professional Go player Lee Se-dol is ready to meet his most confounding rival.

“I am ready to beat AlphaGo,” he said, “even if it gets to start first.”

In an unconventional lineup, the 33-year-old world champion is scheduled to play against AlphaGo, an artificial intelligence program developed by Alphabet’s DeepMind, in a five-game match from March 9 to 15 at the Four Seasons Hotel in Jongno District, central Seoul.

The winner will receive $1 million in prize money.

Computers have long defeated humans in many games. In 1997, supercomputer Deep Blue won in a game of chess against Garry Kasparov, then the world chess champion. And in 2011, supercomputer Watson defeated the champions of the American TV show “Jeopardy!”

But computers have had a hard time developing programs for Go because the game involves an infinite number of moves, unlike chess, where the moves for each piece are limited.

Go, also known as baduk, is a two-player strategy-based board game wherein each person takes turns placing black and white stones on different points on a grid. The goal is for one player to overtake the other by commanding a larger area on the board.

DeepMind CEO Demis Hassabis has estimated the possibility of AlphaGo defeating Lee Sedol to be 50-50. The deep-learning technique of AlphaGo, he said, enabled the program to learn the game in four weeks via one million runs of the game - which would take humans about 1,000 years.

“I’ve been examining AlphaGo’s moves, and it appears to have the skills of an amateur-class champion,” Lee said. “At this rate, I can win the game even if I’m not at my best.”

As for whether he discovered AlphaGo’s weaknesses, he replied, “I will know for sure when I play against AlphaGo, but as of now, it seems to exhibit different skill levels in its games. Perhaps it lacks enough data.”

“I’ll be preparing my moves by analyzing AlphaGo’s moves and its style,” Lee added.

He also has the country’s other professional Go players rooting for him.

Park Seung-cheol, another professional Go player, also estimated that Lee would win 5-0. “But we should keep in mind that AlphaGo can learn faster than human beings.”

The stakes that Lee and the Go community face are quite high. Should Lee lose just one game, the event will be remembered as a time when artificial intelligence defeated human intelligence.

“This game of Go is historic because it not only will determine the winner and loser, but also the possibilities and limitations of human and artificial intelligence,” said Park Chi-moon, vice president of the Korea Baduk Association.

“The shock would be great if Lee loses just one game because it foreshadows an ever closer day when artificial intelligence will surpass human intelligence.”

Artificial intelligence also doesn’t need to rest or sleep and can infinitely store data on the game.

“At its current rate of development, artificial intelligence for the game may overtake that of humans in two years,” he said. “Even if I win this round, if Google challenges me in two years or so, I don’t think the game will be easy to win no matter who the professional player is.”