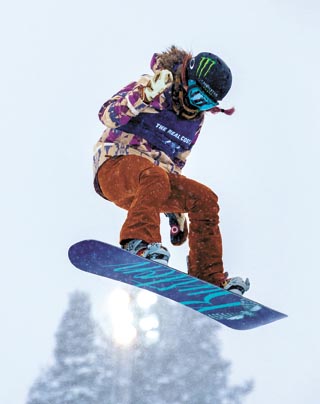 Chloe Kim leaps in the air during the Winter X Games Women’s Superpipe Finals in Aspen, Colorado on Feb. 1st.

Chloe Kim is all smiles until she stands at the top of a half pipe. Her eyes narrow, and soon she’s flying through the air, performing gravity-defying tricks that belie her age.

With 2018 Pyeongchang Olympics approaching, the top snowboarding prospect is getting attention in both the United States and Korea.

Kim, a second-generation Korean American, is rewriting the history of women’s snowboarding. On Feb. 6, she became the first female snowboarder to receive a perfect score of 100 in the half-pipe event at the U.S. Grand Prix in Park City, Utah. The marks were largely due to another milestone achievement during the event: she became the first woman to stomp back-to-back 1080s, or three full spins in the air on one side of the pipe followed immediately by the same on the other, which is a trick so difficult it’s rarely seen even in the men’s event. 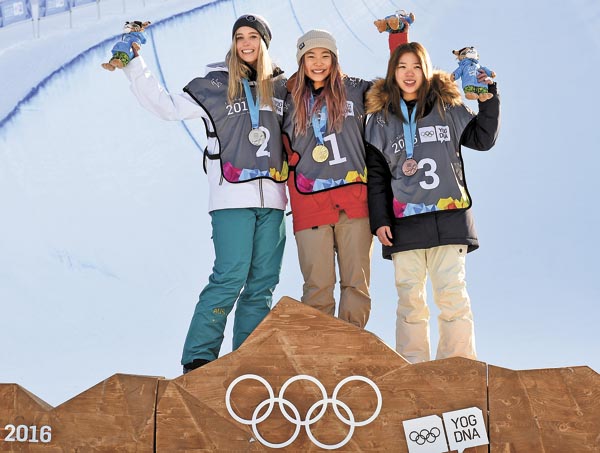 The first rider to ever receive a perfect score in a major event is none other than the legendary Shaun White, who received it in 2012 thanks to back-to-back double cork 1260s (two flips while completing three-and-a-half rotations).

The bottom line is that Kim is so good in the halfpipe, even she can’t seem to accept it.

“Unbelievable,” she exclaimed after seeing her Grand Prix score.

After grabbing two successive wins during the X Games in Aspen, Colorado on Feb. 1 and the Grand Prix later that week, Kim went on to add another gold to her shelf on Feb. 14 at the Lillehammer 2016 Winter Youth Olympic Games in Norway. Although she didn’t bust out any 1080s this time, her impeccable jumps and spins were enough to earn her a 96.5 score. Jeong Yu-rim of South Korea placed third with 86.5 points.

Born in Long Beach, California, Kim was raised by dedicated parents. Chloe’s father, Kim Jong-jin immigrated to the United States in 1982 when he was 26 year-old with only $800 dollars in his pocket. He attended engineering school while working at a gas station to support himself. ESPN recently introduced her father as emblematic of the American dream.

Kim learned snowboarding as a hobby when she was just four year-old. However, once Kim showed her potential in the sport, her life took a dramatic turn. After Kim placed third in the United States of America Snowboard Association (USASA) Championship at the age of six, her father took Kim to Switzerland for training. Hoping to show his daughter a bigger world, her father quit his job to focus on his daughter’s training.

While in Switzerland, he spent two years commuting between Geneva, Switzerland and Avoriaz, France with his daughter. They would leave Geneva at 4 a.m., transferring on the train twice to get to Avoriaz. By the time they got home, it would be 11 p.m. Even when they were back in the United States, her father spent six hours every day driving her to and from practice.

“I could never be what I am today, were it not for dedication by my father,” Kim said.

Her real rise to the top began at age 10, when she began training more systemically. In summer, Kim would practice her form with a skateboard. She would also use the diving platforms at swimming pools to train spinning in mid-air. By the age of 13, Kim was the youngest rider to make it to the U.S. national team. At 14, she became the champion of the World Snowboard Tour.

“Commuting to the ski resort was painful and I often grew tired of it,” said Kim. “But I endured through and I am glad I did. Now I love snowboarding even more.”

Kim has gained tremendous popularity in the United States. She was honored as a 2015 ESPN IMPACT25 Athlete alongside with golfer Lydia Ko and star tennis player Serena Williams. She was also named one of TIME’s 30 Most Influential Teens. When Chloe became the youngest top-ranked female snowboarder in the world in 2014, the city of Los Angeles awarded Chloe a commemorative certificate and declared March 19th would be known as “Chloe Kim Day.” Kelly Clarks, the legendary female snowboarder and gold medalist from the 2002 Salt Lake City Winter Olympics, recently said Chloe is the best snowboarder of her generation. Chloe was also selected as the U.S. Team flag bearer for Lillehammer 2016 Winter Youth Olympic Games.

Chloe was too young to attend 2014 Sochi Olympics. But now that the next Olympics is around the corner, Chloe cannot hide her excitement.

“South Korea is my parents’ home country,” she told the AP in a recent interview. “I will give everything I have in Pyeongchang.”