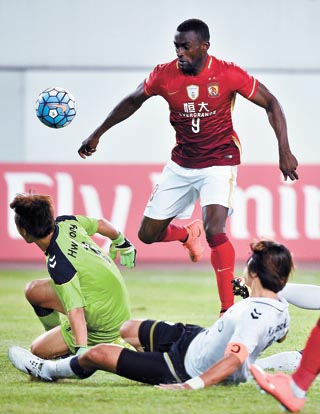 Defending champion Guangzhou, with former Atletico Madrid striker Jackson Martinez making his debut, was held to a 0-0 draw at home by the Pohang Steelers of South Korea.

Guangzhou was forced to play the Group H match in an empty stadium as punishment for filming opponents ahead of last year’s final.

Japanese club Urawa Reds took first place in the group by beating Sydney FC 2-0. Yuki Muto and Shinzo Koroki scored in each half.

Earlier, Shanghai SIPG lost to Melbourne Victory 2-1 in Group G. The Australian team scored the winner on a disputed penalty, converted by Besart Berisha with 20 minutes remaining. Kosta Barbarouses was fouled in the box.

Melbourne took the first-half lead when Jai Ingham finished a quick counter-attack. Wu Lei made it 1-1 for Shanghai in the 52nd minute.

“It was a good football match first of all and I don’t think we deserved to lose if you look at the way we played football,” Eriksson said. “Five games to go, and if we go on playing like this, I think we will play better and better because the conditions will be better and better as well. We have to take points somewhere else.”

Melbourne has never made it past the group stage in five previous Champions League appearances but moved into first place in the group after South Korean club Suwon Bluewings held Japanese team Gamba Osaka to a 0-0 draw.

In later matches, Tractor Sazi of Iran moved to the top of Group C with a 4-0 win over Al Jazira of the United Arab Emirates. Saudi Arabia’s Al Hilal earned a 2-2 away draw with Pakhtakor of Uzbekistan to move into second place.

In Group D, Al-Ahli of Saudi Arabia and Qatar’s Al-Jaish are level in first place after opening wins. Al-Ahli had a 2-1 home victory over Uzbekistan’s Nasaf Qarshi while Al-Jaish had an away win by the same score over Al Ain of the United Arab Emirates. AP