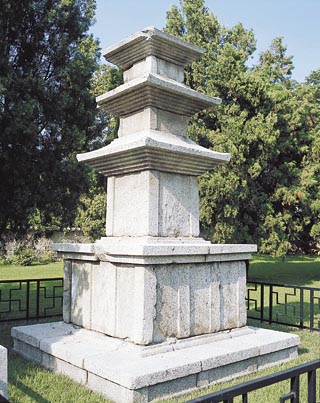 With one originally erected on the east and the other on the west at the precincts of Galhangsa Temple Site (in Gimcheon, North Gyeongsang), these twin stone pagodas were moved to Gyeongbokgung Palace in 1916 to protect them from Japanese colonialists who attempted to smuggle them into Japan.

The pagodas are currently located in the National Museum of Korea in Seoul.

Each pagoda exhibits the typical style of Silla stone pagodas consisting of a double-tier base and a three-story body.

Each of the base’s four sides has two corner and two middle columns carved in low relief; the body and the roof of each story are made by carving a single stone block.

Each of the three bodies has two corner columns also carved in low relief, and each roofstone has five-step cornices under the eaves.

The discovered record engraved on the base of the eastern pagoda revealed that the pagodas were set up in 758 under the commission of Dharma Master Eonjeok and his two sisters.

Remarkably, the inscription was written using an archaic Korean writing system called Idu wherein Chinese characters were borrowed to mark the sounds of the Korean language.

Both pagodas are in comparatively good condition except for the finials, which are now missing.

Their size may not be considerable, but the outstanding structural balance and proportion and the well-preserved details showing the typical style of Silla pagodas make them a valuable part of the Korean Buddhist heritage.