KDI not optimistic about economy

KDI not optimistic about economy 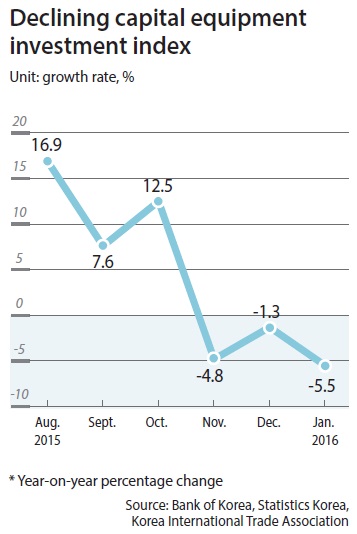 The state-run economic think tank has officially acknowledged the Korean economy not might bounce back like the Ministry of Strategy and Finance continues to believe, as the domestic market turns out to be weakening at a faster rate and exports continue to struggle.

In a report released Monday, the Korea Development Institute (KDI) said the latest economic indicators continue to be sluggish and overall improvement in domestic demand has weakened.

“Korea’s slowing growth is partially due to faster-than-expected deterioration in external conditions combined with anticipated factors,” the KDI said in the report.

The institute added that retail sales in January improved slightly on temporary factors, but consumption sentiment stayed stagnant, which signals weakening growth in private consumption. Non-durable and semi-durable goods expanded by 8.7 percent and 4.9 percent each, while durable goods fell 2.9 percent due to a drop in sales of passenger cars.

The composite consumer sentiment index dropped to 98 last month from 100 in January, which also indicates continuing weakness in consumption sentiment.

KDI added that investment in the construction sector has been strong overall, but investment in capital equipment related to the sector, including machinery and transport products, has declined.

Exports recorded a 12.2 percent plunge last month, lower than the 18.8 percent in January due to an increased number of workdays, according to the KDI. By item, petroleum products and semiconductors decreased 15.4 percent and 12.6 percent each last month from a year ago. Exports to China and Japan fell 12.9 percent and 15 percent, respectively.

“The decrease in exports eased in February, but the downward trend persists on slowing global growth, including China’s,” the report said.

It is the second month in a row that the KDI has expressed such concerns about the economy. The state-run institute is usually positive in its outlook, saying the economy is gaining growth momentum gradually.

Despite falling production output, declining consumer confidence and shrinking investments, Finance Minister Yoo Il-ho has remained quite optimistic, saying that such a downturn is only temporary and that there is no need for additional government actions.

In fact, the government blamed the raising of the individual consumption tax on various products and services including automobiles and luxury bags in January as the main cause of the disappointing indices.

Yoo has expressed confidence that the re-lowering of the tax from February will lift economic growth.

But since even government-owned think tanks have now expressed otherwise, some have speculated that the finance minister may soon change his tune on the economic situation.

A high-level government official said on Friday that everyone has to look at the economic situation from a long-term perspective and be patient for the government to find ways to get through the economic slowdown.

“Korea is facing a number of problems such as weak exports and local and global uncertainties,” Vice Finance Minister Choi Sang-mok said at a briefing in the Sejong Government Complex on Monday. “Some accuse the government officials of being too optimistic in their analysis of the economic situation, but I would say we are trying to be positive instead.

“It is our job to carry out the government’s plans that have been set up already, and I am positive that some of the plans and our efforts can eventually lead to positive impacts on the economy.”