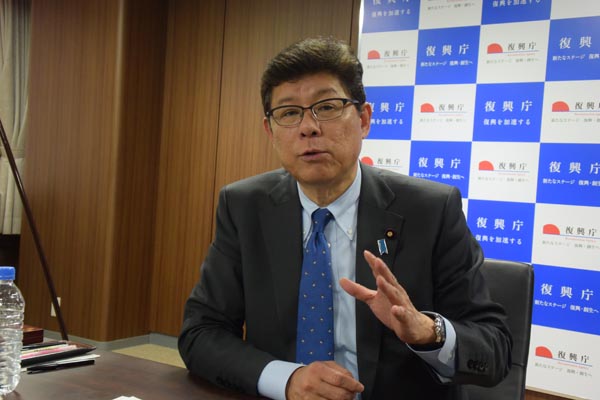 It has been five years since a devastating 9.0-magnitude earthquake and tsunami struck Japan’s northeastern coast on March 11, 2011, leaving more than 18,000 dead or missing and resulting in a meltdown at the Fukushima Daiichi Nuclear Power Plant.

To mark the anniversary of the disaster, the Joongang Ilbo sat down with Tsuyoshi Takagi, the minister in charge of reconstruction. The Japanese government established the Reconstruction Agency in 2012 to accelerate cleanup efforts and the revitalization of areas affected by the earthquake.

The following is an edited excerpt of the interview with the lawmaker.

Q. What is the focus of the reconstruction and revitalization plan as this 10-year project reaches its halfway point?

A. The 2011 Tohoku earthquake was a disaster unlike any other experienced by humanity. Furthermore, it overlapped with the nuclear meltdowns. We think that even if our northeastern region is hit again by a tsunami, the same kind of tragedy cannot be repeated. The agency’s aim is not to have a single victim should an event like this ever happen again. The damage to the nuclear reactors is also being taken seriously, and we are putting human safety above anything else.

What are some of the agency’s major accomplishments?

A budget of about 25.5 trillion yen ($225 billion) was allocated for the first five years of the reconstruction and restoration project. The reconstruction of important infrastructure is almost complete. Construction of 25,000 public houses for the people affected by the disaster will be finished by spring next year, which is about 85 percent of the initial number of houses that were planned to be built. Radiation levels in Fukushima have decreased by about 65 percent since November 2011, and 74 percent of the farmland has also been recovered.

What is the agency’s next task?

With progress made in restoration and reconstruction, the agency now has new tasks. We are planning to revitalize the local community and its livelihood.Starting this year, the agency will devote efforts into promoting tourism in the northeastern part of Japan. I encourage Korean travelers to visit this region and try its delicacies. Right now, Fukushima is divided into regions where people are advised not to return, restricted from residing and places where the government is planning to cancel the evacuation order.

How is the decommissioning of the Fukushima nuclear plant going, and what is the agency planning to do with the contaminated water?

The decommissioning of the nuclear reactors and measures to deal with the polluted water is an unprecedentedly difficult project. Therefore, the government is at the forefront of executing the project instead of leaving it up to Tokyo Electric Power Company [which owns the nuclear power plant].

Last October, the construction of barrier walls near the sea was completed and seems to have reduced the concentration levels of radioactive material in the port.