Seoul striker is ready to make his return

Seoul striker is ready to make his return 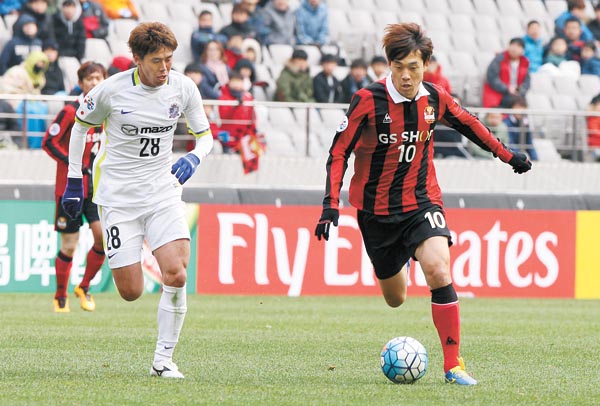 FC Seoul striker Park Chu-young is eager to make his way back to the top, and it looks like it could happen.

Park first gained fame during the AFC Youth Championship 2004 when he led the U20 Korean national team to the title and received the tournament’s Golden Ball and MVP awards.

He was deemed to be a football prodigy and went on to become a nationally hyped star.

Park joined Seoul fresh out of Korea University in 2005 and played for the team until 2008 before moving to AS Monaco in the French League. His career outside of Korea was hectic, and jumped among teams including AS Monaco, Arsenal and Watford in the English Premier League, Celta Vigo in the Spanish League and Al-Shabab in Saudi Arabia.

Park returned to his old stomping grounds in 2015 with high hopes, though that optimism was dashed in the middle of the season after he injured his left foot in September and was out for good for the remainder.

He has yet to fully recover, but after leaving behind an unsettling season, he appears ready for a grand return.

On Feb. 23, in the first game of Asian Champions League (ACL) group stage against Buriram United of Thailand, Park dished out one assist to help Seoul claim a 6-0 victory.

His free kick in the second game against Sanfrecce Hiroshima also looked sharp.

As the only Korean footballer in the Seoul striker trio that includes Dejan Damjanovic and Carlos Adriano, Park and Seoul are expected to stay at the top of the K-League in the upcoming season.

Signs of Park’s much anticipated return were also evident in the K-League Classic season opener against defending champions Jeonbuk Hyundai Motors on Saturday.

Despite the 1-0 defeat, the match gave Seoul added hope. Park stepped into the game in the 67th minute and put on a good performance. Not only did he appear light on his feet, but his header attempt in the 85th minute was menacing enough to frighten Jeonbuk’s defense.

Park was also present during the K-League Classic press conference on March 7.

“This is my first time doing a press conference,” said Park nervously.

When asked about his condition, Park explained, “I was unable to go through the entire winter training. I played some pickup games but it hasn’t been long since I put back on my football boots. The team is prepared, but personally, I’m not there yet. My physical condition is still not at its best.”

But he was quick to add that he was getting there and aiming for the championship.

“I need to be in the best condition. I can tell my condition is improving. I have yet to set a target for the number of goals this season. Obviously, I would like to score as many goals as possible. But more importantly, I need to refrain from getting hurt. The championship is something that everyone on the team wants. I think it’s a feasible ambition for us.”

Park also felt optimistic about the Seoul trio. “Damjanovic and Adriano are great football players,” he said. “They are adaptive and flexible when it comes to their style of play. We are able to come up with many different combinations of plays. The synergy among us could double our attacks. If we play for the team’s benefit and not out of our own selfish desire or glory, then I think we have a decent shot at the trophy.”