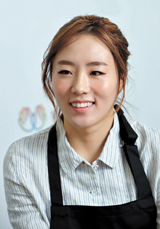 South Korean speed skater Lee Sang-hwa is satisfied with the season and hopes to enjoy the rest of her career. [KIM HYUN-DONG]

South Korea’s ace speed skater Lee Sang-hwa was all smiles when she was spotted in a kitchen in Guri, Gyeonggi Province on Friday.

Her disposition was only remarkable because at the very same moment, the ISU World Cup Speed Skating Final was taking place in Heerenveen, the Netherlands, to wrap up the 2015-2016 season.

Instead of attending the finals, Lee decided to turn patissier for a day to help underprivileged children. She attended a baking class for 22 kids co-sponsored by non-profit organization We Start and bakery brand Bread&Co as a special guest. She also donated the money earned from the sales of cakes named after her.

She seemed unfazed by missing the last event of the year, and expressed satisfaction with her overall results this season. Lee has been suffering from chronic knee pain and had been unable to obtain satisfactory results for a few years. But as she won first place in 500-meter event in the World Single Distance Championships for Women for the first time in three years at Kolomna, Russia last month, Lee seems to have overcome the injury that held her down for so long.

JoongAng Ilbo met with Lee in Guri during the baking day to discuss the season as well as on the upcoming Winter Olympics.

Q. Can you talk about this season?

A. Now that it’s over, I am taking things easy and enjoying my free time. The pressure going into the season was different from the Olympics but still burdensome. I am glad to have come out with decent results. I have been doing some rehab for my knee as well. I plan to fly over to Canada in early May to start training again.

It must not have been easy to continue your career after two Olympic wins. How did you cope with it?

It’s always tough after the Olympics. After my second gold in two Olympics at Sochi, expectations were especially high and it was too much of a burden for me. I think I am doing well but people constantly tell me I’m in a slump when I fail to finish first in a race. Frankly, I never failed to finish within the top ten at every event. I never thought I was in a slump. But when people say I am, it really wears me out. I’m only human. It’s just not possible to top the podium after every event. In the 500-meter event, 0.01 seconds can make all the difference.

Zhang Hong of China has surfaced as your new rival. What are your thoughts on her?

Zhang is a solid skater, especially in the 1000-meter event. I actually never competed against Zhang until the last season. I still cannot fully grasp her style and I believe my performance early in this season wasn’t as good as it could’ve been. I read an article in which Zhang said she could beat me in the ice rink. Her remark was a great motivation for me. I am glad to have a rival. But personally, I think American skaters such as Heather Richardson-Bergsma and Brittany Bowe are better skaters than Zhang.

I go in to the clinic for regular check-ups. I think I can last until the Olympics in 2018. If it was bad enough, I would have stopped skating. It’s hanging in there.

The 2018 Pyeongchang Olympics will be your fourth Olympics. How does that feel?

It feels like I am spending my entire 20s in the Olympics. I chose to be an athlete so it is a responsibility as well as privilege for me to compete in the Olympics. Even talking about Pyeongchang makes me ecstatic. Just thinking about competing in Gangneung during Pyeongchang Olympics makes my heart full. I might cry when the moment comes. But I’ve already won two golds in Vancouver and Sochi. I want to loosen up a little bit and enjoy myself in Pyeongchang. I couldn’t force myself to have that mentality in the last Olympics. I hope to be pressured less in Pyeongchang.

If you have three goals you would like to achieve from now on, what would they be?

First, I want to come out with decent results from Pyeongchang, which does not necessarily mean a gold medal. Secondly, I still want to be an inspiration to others even after my retirement. Finally, I want to be a good mother and wife.