Boeing Korea will build a new center to train pilots

Boeing Korea will build a new center to train pilots 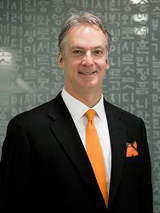 Boeing Korea, a subsidiary of the U.S.-based manufacturer of commercial jetliners and defense systems, will build an aviation training facility run in cooperation with Korean Air, the president of Boeing Korea said Thursday.

The facility, slated to open in the second half of this year in the Incheon Free Economic Zone, will be devoted to training new pilots.

Commemorating the 100th anniversary of the Boeing Company this year, Boeing Korea held a luncheon in central Seoul on Thursday and shared its plans to strengthen its partnership with Korea, one of the 10 largest international markets for the airline industry.

Boeing Flight Services has already been providing training for Boeing aircraft to Korean Air and its low-cost subsidiary, Jin Air. It has also been doing the same with Boeing and Airbus aircraft for Asiana at the airline’s training facilities. But the new facility in Incheon is expected to expand the scope of its training in Korea and produce up to 3,500 new pilots annually.

As global economies expand and traveling becomes more frequent, the need for personnel to manage and control flights has increased, particularly in the Asia-Pacific region.

The world’s aviation industry will need 558,000 more commercial airplane pilots through 2034, with the largest demand from Asia, which will require an estimated 226,000 new pilots, according to the 2015 Boeing Pilot and Technical Outlook, a report released by the company last year.

“Seoul and Korea are in a good geographic position with Incheon, infrastructure and airports here,” said Eric John, president of Boeing Korea, who led the luncheon. “Incheon ... is one of the reasons why the market is growing faster here … and pilots will be another huge growth generator [in the country].”

Boeing Korea is also preparing for several campaigns to promote its commercial and defense platforms and systems, though details have yet to be released.

The company cited the fuel efficiency and reliability of its aircraft as its biggest advantages over its competitors, but stressed the value of its products over everything else.

“It all boils down to one word: value,” the president said. “[We will] keep figuring out how to produce the best value.”

After its establishment in 1988, Boeing Korea is now partnered with over 35 domestic companies in manufacturing, logistics and research and development. While its spending on domestic investment was $340 million in 2012, they have grown every year to hit $500 million last year. The upward trend is likely to continue this year.

Major partners of Boeing Korea include Korean Air, Asiana Airlines, Korea Aerospace Industries and Jeju Air. The biggest portion of its spending was on buying parts from Korean Air.