Curious spectators will find a home at Winter Games site

Curious spectators will find a home at Winter Games site 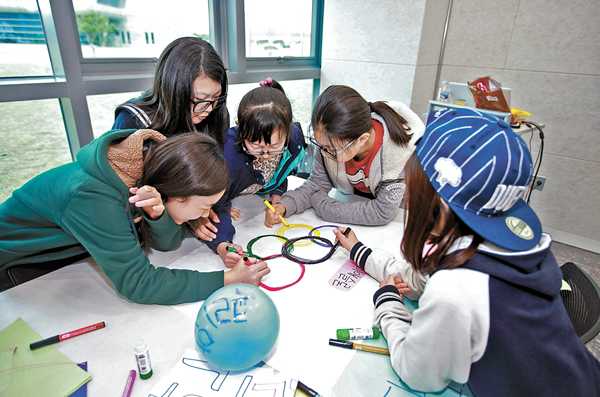 Although participation in the test events is limited to professional athletes, interested spectators now have a chance to experience what it’s like to slide down the half-pipe on a snowboard or to fly through the air experiencing a ski jump thanks to the 2018 PyeongChang House established by the PyeongChang Organizing Committee for the 2018 Olympic & Paralympic Winter Games (POCOG).

Among all the efforts the POCOG is putting in to get the general public involved as much as possible in the games, the organizing body will launch a pilot educational project titled “Enjoy the Olympics Program” to encourage younger people to learn more about the Olympics in Korea, it announced on Tuesday.

After the pilot program, the POCOG will introduce more projects starting from April 26 to give the public more information on the Olympics, including the Olympic values by Pierre de Coubertin, the father of the modern Olympics, which reads, “The important thing in life is not the triumph but the struggle, the essential thing is not to have conquered but to have fought well.”

The participants will also get a chance to meet people who took part in the preparation procedure firsthand.

The POCOG will also run a program giving students an added cheering experience. The students will get a chance to organize cheering squads and create their own cheering chant in the program that is scheduled to meet four times a week.

The POCOG has also made recent improvements to the promotional house by installing PR sculptures and digital panels as well as a signboard and direction posts. The organizing body has bolstered its virtual exhibits as well by adding snowboard cross in the 4D experience room. The committee also intends to build up its content at the location with Paralympics related material and additional materials utilzing Information and Communications Technology.

“We will push forward with the plan to add a stop to the local bus line and operate a regular transportation system to make it more convenient for visitors. Through our effort, we hope to make the 2018 PyeongChang House a landmark tourist attraction of Gangneung,” said Shin Mu-chol, the POCOG director general of communications.

The venue is well-received by the foreign media. Channel 9 of Australia recommended a visit to the promotional house to learn about winter sports and called it “insightful” and “unbelievable.”