Chairman of Doosan Corp. takes charge of the group

Chairman of Doosan Corp. takes charge of the group 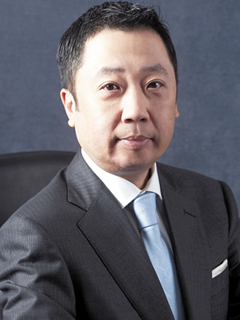 The appointment makes Doosan the first conglomerate to have a fourth-generation leader. His father, Park Yong-kon, is the first son of the late first chairman, Park Doo-byung, and a grandson to the founder of the group, Park Seung-jik, making appointed Park the eldest son of the eldest son in the family tree.

The former chairman, Park Yong-maan, will chair Doosan Infracore following the reshuffle. He will also remain head of the Doosan Leadership Institute and the Korea Chamber of Commerce & Industry.

Newly appointed Chairman Park was born in 1962 in Seoul and attended Korea University Business School. He went on to earn a Master of Business Administration degree from Boston University in Massachusetts.

Since 2009, he has also served as CEO of Doosan Group’s construction arm, Doosan Engineering & Construction, and owner of the Doosan Bears, the conglomerate’s baseball team.

His first task after taking office will be to find future growth engines for the troubled affiliates of the group, such as Doosan Infracore and Doosan Engine.