National players on way to nine in a row

National players on way to nine in a row 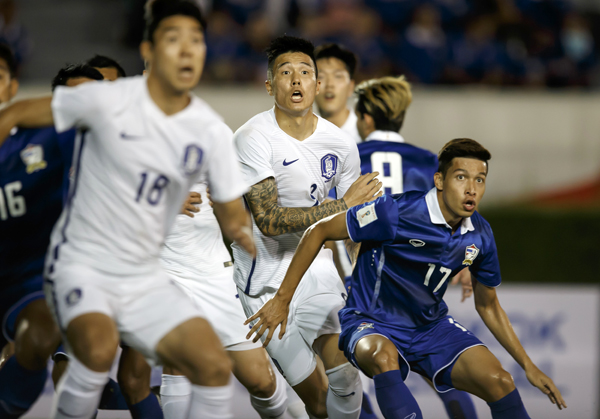 The South Korean national football team beat Thailand on Sunday in an exhibition game to set a new record of eight consecutive games without conceding a single goal.

The Taeguk Warriors first matched the team’s shutout record, which was set in 1978 and again in 1989, on Thursday when it beat Lebanon 1-0 in the regional qualifier for the 2018 World Cup in Russia.

The team has scored 26 goals in the past eight matches, while forfeiting none. In addition to the record-setting victories, the two games played last week against Lebanon and Thailand gave South Korea a good insight into their strengths and weaknesses in preparation for the World Cup.

Although the team already has secured its spot in the final round of the regional qualifier, manager Uli Stielike wanted to ensure a confident win against Lebanon and started the game with his top players.

With Hwang Ui-jo at the top, the team adopted a 4-1-4-1 formation in the pitch. The team went scoreless the entire match until Ulsan Hyundai FC’s Lee Jeong-hyeop, who stepped into the pitch in the 69th minute for Hwang, scored the game winner in stoppage time off a brilliant pass by Ki Sung-yueng. Ki shook off the Lebanese defenders by penetrating into the left side of the penalty box to connect the ball to Lee Jeong-hyeop.

Korea played solid possession football against Lebanon. From early on, South Korea took control of the pace of the game and didn’t allow much opportunity for its opponents to get ahold of the ball. By the second half, the possession statistic stood at 77% Korea and 23% Lebanon.

Korean midfielders Ki and Lee Chung-yong controlled the tempo of the game splendidly, feeding the ball up front when necessary but retreating when Lebanese defense was too tight. Thanks to their effort, the Warriors were able to put pressure on the Lebanese side consistently, making 14 shot attempts throughout the entire match.

However, the issue for South Korea was not the ball possession, but its ability to finish shots. South Korea didn’t have much to show for their attacking efforts with only five of 14 goal attempts on target.

South Korea had some decent chances, including in the 33rd minute when Hwang blasted the ball off his right foot after it went loose during a corner kick attempt. His shot went straight to the Lebanese goalie who was standing in the middle of the goal, allowing him to punch the ball outside the penalty box for a save.

The international friendly game against Thailand in Bangkok on Sunday was similar. Even though the match wasn’t an official game, the South Korean team had a lot at stake considering they would surpass the past perfect game record set by their predecessors.

Manager Stielike stressed the importance of the match by placing two forwards at the top, FC Porto’s Suk Hyun-jun and Lee Jeong-hyeop who scored the solo goal against Lebanon. Putting two strikers up front from the beginning meant the manager was set to exploit its offense to pressure the Thai defense.

Suk lifted the team early in the match to 1-0 when he smashed an explosive 30-yard shot from outside the penalty box and caught the Thai defenders and goalie off guard in the fourth minute.

South Korea demonstrated its superiority in ball control and possession against its Thai counterpart as well. However, despite its domination in possession, South Korea went the remainder of the match without much incident after Suk’s goal. One missed opportunity occurred when midfielder Nam Tae-hee poked the ball inside the penalty box in the 30th minute and wide open Lee Jeong-hyeop had the chance to add another goal. However, his diving header bounced right to the goalie’s chest.

Although the team has set nation’s new perfect game record, manager Stielike is focused on the future. “History is not important in football,” said Stielike after the match. “It is the future that is more important,” hinting at his determination to outdo the team’s performance against Lebanon and Thailand in the next international matches.

The South Korean national team is slated to play against Europe’s football powerhouse Spain on June 1. Although the team has had tremendous success so far, it will have to do some work before it can match top notch European teams.