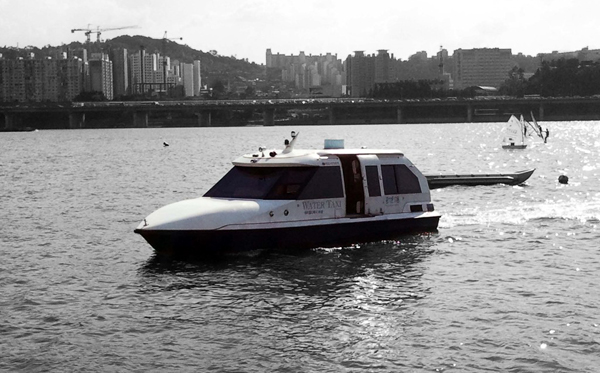 A water taxi piloting the Han River in 2010. [JOONGANG PHOTO]

The operation of water taxis along the Han River, which was cancelled after the Sewol ferry disaster, will resume sometime between September and October, the Seoul Metropolitan Government announced Tuesday. The taxi service will carry passengers from Ttukseom, eastern Seoul and Jamsil, southeastern Seoul to Yeouido, western Seoul.

The initial enterprise in charge of operating the water taxis was Cheonghaejin Marine Company, which also operated the Sewol ferry, but after the sinking of the ferry on April 2014, which resulted in the deaths of 295 people, operation rights were transferred to the Association of Veteran Special Commandos.

The business itself, however, performed poorly in 2014, as the number of users from January to March was only about five to 60 per day. The Seoul Metropolitan Government is therefore urging the association to come up with ways of attracting more customers, especially tourists.

As a result, the group is planning to invest about 2 billion won ($1.71 million) in the renovation of a pier on Banpo Seorae Island, southern Seoul. The new complex will boast a variety of customer-friendly facilities.