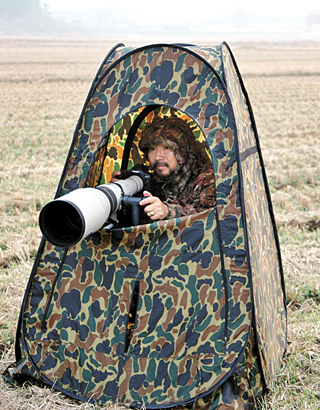 Choi Jong-soo in a camouflage tent he installed near the Junam Reservoir in Changwon, South Gyeongsang, to photograph the lesser white-fronted goose last winter. [CHOI JONG-SOO]

For 32 years, Choi Jong-soo, a 52-year-old grade-six civil servant, traveled in and out of Korea battling scorching heat, giant insects and debilitating hunger in order to capture his beloved prey: birds.

But Choi isn’t a master hunter or a bird trapper. He’s the director of South Gyeongsang’s Photography Department, a part of its Public Affairs Division, and an avid wildlife photographer.

In all, Choi has captured 400 out of Korea’s 540 bird species with his camera.

In his new book, “Birds and People,” released last Friday, he explains how humans and birds can coexist, for instance by adorning one’s garden with artificial nests and spring pools to attract birds.

Choi’s fascination with his avian friends began one fine spring afternoon 32 years ago on a visit to the Junam Reservoir in Changwon, South Gyeongsang. At the time, he was a freshman in Kyungnam University’s ecology department, and he went to the reservoir that day hoping to do some birding. Maybe he’d catch sight of the usual dusky thrush, a flock of skylarks or a few hundred geese.

But as the sun was going down, he looked up and saw thousands upon thousands of Baikal teals flying overhead. Recalling that moment, Choi says he stood in awe, absolutely speechless.

“It was extraordinary, watching all those birds move as one organism,” says Choi. 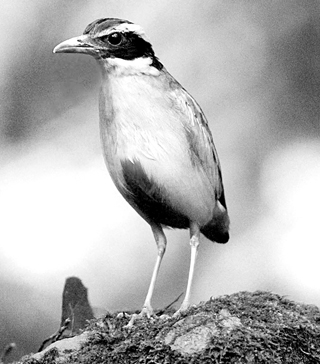 A picture of a fairy pitta taken on Jeju Island in 2000. [CHOI JONG-SOO]

Afterwards, he began reading ornithology magazines and became determined that he would one day be an expert bird photographer. For two years, he audited classes in the photography department. As a sophomore, he sold a gold ring his father had received for his 60th birthday in order to buy a camera lens that cost more than 1 million won ($860). Whenever he had the time and money, he roamed all over Korea, and even traveled to 10 other countries, including Japan and Hong Kong, in pursuit of his passion.

It’s satisfying work, he says, but certainly no easy sledding.

In July 2000, Choi took a three-day vacation to Jeju Island’s Gotjawal Valley to photograph the fairy pitta, also known as the seven-colored bird, a small orange, red and teal species with a brilliant cyan stripe across its wings.

Choi soon found a fairy pitta nest and pitched his camouflage tent 10 meters (30 feet) away, but the fairy pitta never came down on its nest. Instead, it flew around the tent incessantly, making it impossible for Choi to take a single picture.

This went on for days, until he was finally ready to pack things in, but then he heard the fairy pitta call, and turning to look, spotted it sitting right in its nest.

“If I was a fisherman, this is what it must have felt like to catch a big fish,” says Choi. 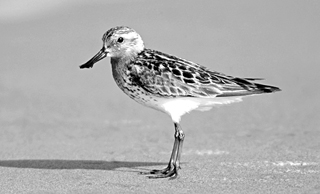 A picture of a spoon-billed sandpiper taken at the mouth of the Nakdong River in 2004. [CHOI JONG-SOO]

Choi’s next major target? He says he desperately wants to capture a cuckoo parasitizing in a vinous-throated parrot bill’s nest. Cuckoos lay eggs in other bird species’ nests, and the cuckoo chicks, shortly after hatching, push the other eggs out of the nest to monopolize the care and attention of their foster parents (hence the term “to be cuckolded”).

In 1992, Choi married and became a civil servant, and it’s now been over 30 years since he first began actively hunting with his lens, but his love for birds hasn’t faded.

Whereas he used to focus on capturing images of rare species, recently he’s become attracted to common species that people can see in their daily lives, such as sparrows and swallows.

His method of taking pictures has also changed. In the past, he would often travel far and wide to find his subjects, but these days, he prefers to invent ways of bringing the birds into places where people are living their daily lives.

“Where birds can’t live, humans can’t live,” says Choi. “I want to create a space where humans and birds can coexist.”