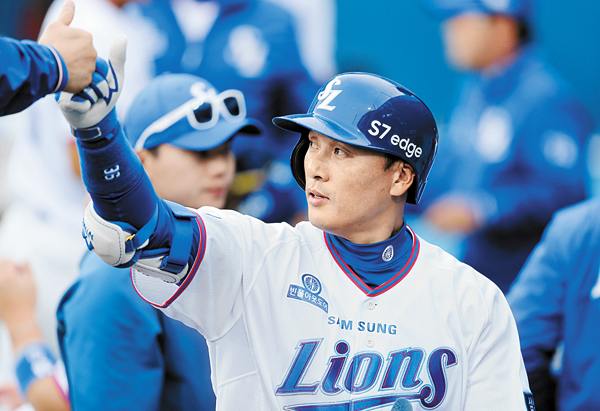 Samsung Lions slugger Lee Seung-yuop is greeted by his teammates after hitting a solo homer in Saturday’s game against the Doosan Bears. [SAMSUNG LIONS]

After the Samsung Lions won their first game at their new home stadium, legendary Lions slugger Lee Seung-yuop was still focused on the fans.

“I will continue to show the fans good plays,” said Lee in an interview at the state-of-the-art Daegu Samsung Lions Park.

Lee joined the Lions in 1995 and has played for the Daegu club for almost 20 years, minus a brief stint in Japan. One of the best sluggers in Korea, he won his first Korean Series in 2002, and a year later broke the Asian single-season home run record with 56. Lee returned from Japan in 2012 and had played in the team’s old digs ever since, but always expressed hope that he’d get to play in the new stadium before he retired in 2017.

Lee welcomed the new training facilities and various amenities offered by the new stadium. But above all, he welcomes the fact that he can be closer to the fans.

“The new stadium is very fan-friendly,” said Lee, sounding genuinely excited. “In the old facility, I was unable to spend much time with the fans after a game when fans came down near the stadium. But at the new one, I am much closer to the fans since the bleachers and the field are much closer.”

But the slugger is clear that his top priority when it comes to his fans is winning games. “I am sure we are going to have more fans at the new stadium,” Lee said before the season began. “This means we have more responsibility to play better ballgames. The source of players’ strength is the cheers and encouragement of fans. All we have to do now is play good baseball.”

He has lived up to his words in the first weekend of the regular season. In the first inning on Saturday, Lee hit a single while the game was tied 1-1 and eventually drove home after a clutch hit by Back Sang-won, making him the second player in KBO history to tally 1,200 career runs-scored. After his record-setting play, Lee hit a solo homer in the third inning while the Lions were behind by 3-2, driving the ball 125 meters (410 feet) over the right fence. This was Lee’s first home run and the Lions’ first club homer at the new ballpark. The Lions eventually won the Saturday’s game, in large part thanks to Lee’s effort.

During the off-season training games, Lee recorded a .550 batting average (BA) but his BA decreased to .280 during the preseason games.

“This is the best start I’ve had since I returned to the Lions in 2012. With the new ballpark and everything, I can’t wait for this season to unfold. I have so much to do.”

The third game between the Lions and the Bears slated for yesterday was rained out.