Park gets a hit in MLB debut against Baltimore

Park gets a hit in MLB debut against Baltimore 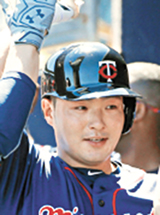 Minnesota Twins’ Park Byung-ho had a promising start to his Major League career with a hit yesterday against the Baltimore Orioles at Oriole Park in Camden Yards, Baltimore.

Park played as a designated hitter and went one-for-three with one base on balls and one strikeout for a .333 batting average.

He also scored a run in the seventh inning after reaching the base when he was hit by a pitch by Orioles’ Mychal Givens.

Although Orioles outfielder Kim Hyun-soo has made it into the club’s 25-man roster for the opening game, he did not get any playing time yesterday, despite the hopes of Korean fans.

However, South Korean baseball fans got a chance to watch a showdown between another two Korean players yesterday when Choo Shin-soo’s Texas Rangers and Lee Dae-ho’s Seattle Mariners went head to head in the Rangers’ home opener at Globe Life Park in Arlington, Texas. The Rangers overcame the Mariners 3-2.

Although neither of them had any hits, the fact that two old friends from Busan met each other in the big leagues was enough to excite fans.

Choo was second in the batting lineup and had no hits during his three at-bats with one run batted in (RBI). His RBI came when he earned a base on balls in the fifth inning when the bases were loaded.

Lee went to the plate as a pinch-hitter for Mariners center fielder Leonys Martin in the seventh inning, while the team had one out and two bases loaded, only to strike out by Rangers’ starting pitcher Cole Hamels. Lee struck out swinging when Hamels threw a changeup. ?