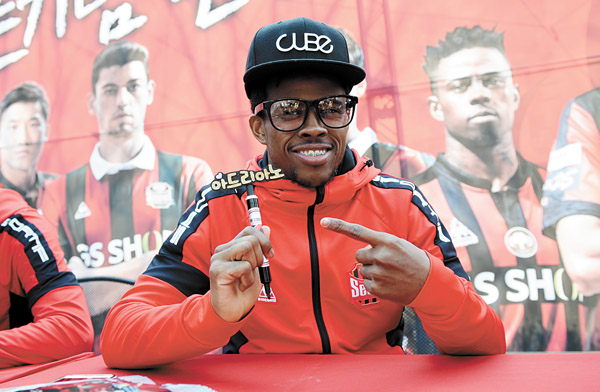 Recently, the hobbies of football stars have become a hot topic among fans of the sport. Joe Allen, a Welsh footballer who plays for Liverpool, raises pet chickens in his garden, while Spanish player Xavi Hernandez, the former Barcelona star who later joined Qatari club Al Sadd, enjoys mushroom picking. As it turns out, K-League Classic is also full of players with unique hobbies.

FC Seoul’s Carlos Adriano, whose lethal ways in front of a goal have made Korean football fans go wild this season, is an avid hat collector. Adriano, who considers himself a fashion enthusiast, often dons a hat before stepping out.

“I wear different hats depending on what I wear that day,” explained Adriano when asked why he collects hats. “I don’t really have any preference when it comes to brand but when I see a hat I like, I just buy it. Usually, I’m attentive about what I wear.” He added, “I don’t know how many hats I own. I lost the track.”

Some foreign K-League stars like to take advantage of being in Korea and experience its culture. Seoul’s Spanish central defender Osmar Barba is often spotted around Gyeongbok palace on his day off. Bernardo Vieira de Souza, of Ulsan Hyundai FC, is also under the spell of old Korean heritage. He likes to try out hanbok (Korean traditional clothing) whenever he gets a chance and travel around the country to visit different palaces and historic sites. Bernardo is also an ardent fan of the National Folk Museum.

Incheon United FC captain Kim Dong-suk is a fashion-lover and his hobby is attending fashion shows whenver he has a chance. In addition to his interest in the fashion industry, there is another reason behind his frequent visits to the shows.

“I stayed close with Jang Hyung-chul, who was getting ready to showcase as a designer, while I was in Ulsan,” said Kim. “Jang became huge and I go to his shows often. I was there with Jang when things weren’t going so well for him and I am proud of him for making it in the industry.”

Gwangju FC’s Lee Eud-deum spends his spare time assembling model cars. Whenever a new model comes out, he visits a store and purchases it to complete the assembly during his off day. Not only is it fun, but for Lee, its benefits are practical as well.

“Assembling model cars really helps me focus,” said Lee. “Obviously it helps in football to have a high level of concentration. And I think it’s a healthy hobby, too.”

Some K-League managers also enjoy interesting hobbies of their own. Choi Kang-hee, of Jeonbuk Hyundai FC, loves to draw cartoons. He has developed his skill over the years but he is currently unable to spend much time drawing due to his hectic schedule. On the other hand, Incheon manager Kim Do-hoon’s hobby is calligraphy, which seems to be a bit of an odd fit given his physical stature. Kim even participated in a calligraphy competition and received an award.

Suwon FC coach Cho Duck-je’s hobby is playing in an amateur football games. A retired professional footballer playing in the amateur games may sound odd, but he has been doing it for 20 years now.

“There is an amateur team consisting of Suwon citizens,” said Cho. “I go out to play football when I have a day off and grab a bite afterwards with the other players. Then we engage in deep conversations about life.”